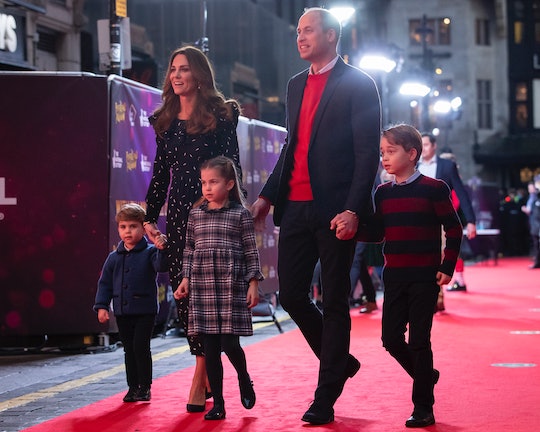 Did Kate Middleton & Prince William Break The Rules With Their Family Christmas Outing?

The Duke and Duchess of Cambridge have been accused of breaking COVID-19 protocols.

While members of the royal family often make headlines for the simplest things, it isn't every day that a walk becomes front-page news. But here we are. The Daily Mail has accused Kate Middleton and Prince William of breaking COVID rules after the couple took their three children on a walk outside in a group larger than six people. According to the paper, the walk violated England's so-called "rule of six," which states people can meet friends and family they do not live with in an outdoor setting as long as they limit their group to no more than six people.

On Sunday, the Duke and Duchess of Cambridge were photographed visiting Luminate, a holiday-themed illuminated nature trail on the Queen's Sandringham Estate, as People reported. With them for the festive outing were their three children, Prince George, Princess Charlotte, and Prince Louis. But the Cambridges weren't the only royals on the trail. Rather, they were reportedly joined by Prince William's uncle, Prince Edward, his wife Sophie, and their two teenage children.

An anonymous eye witness told the Daily Mail they saw the two families "mingling" together at various points on the trail. "They were clearly breaking Covid rules, in my opinion, because there were nine of them from two separate households," the paper quoted a source as having said. "They were obviously all having a fun evening out. You could tell that the royal youngsters were having a great time. But I couldn't help thinking that it was one rule for them and another for the rest of us. It was really quite blatant."

According to The Washington Post, the Queen's Sandringham Estate lies in Norfolk, a county that has been deemed to fall under the United Kingdom's Tier 2 rules. These rules limit individuals, including children, from gathering outdoors in groups larger than six. "You can see friends and family you do not live with (or do not have a support bubble with) outdoors, in a group of no more than 6," the government's Tier 2 guidance reads. "This limit of 6 includes children of any age."

Royal sources told the Daily Mail that any mingling between the Cambridges and the Wessexes while at Luminate was inadvertent. "The two families were given separate consecutive slots to visit the trail just before it opened to the general public," the paper quoted the source as having said. "As anyone with young children will know, there were moments on the 90-minute walk where it was difficult to keep the two family groups apart, particularly at bottlenecks on the trail."

Despite their mingling on the trail, royal sources maintained the two families had arrived and departed separately and had no premeditated plans to meet up at the trail as a group of nine.

This isn't the first time Prince William and Middleton have faced criticism for conducting royal appearances amid the ongoing coronavirus pandemic. Earlier this month, Welsh Health Minister Vaughan Gething appeared to criticize the couple's three-day royal train trip, telling the BBC he'd "rather no one was having unnecessary visits." At the time of their visit, the BBC reported COVID case numbers in Wales were among the highest in the United Kingdom.

“People always have divisive views about the monarchy," the BBC reported Gething said. "But their visit isn’t an excuse for people to say that they are confused about what they are being asked to do.”