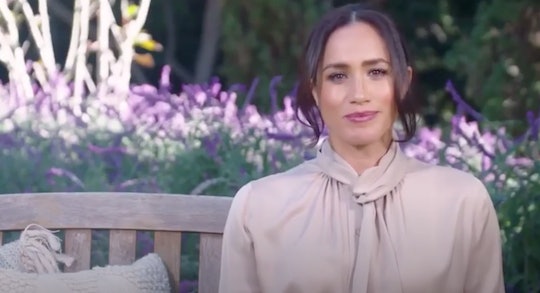 Meghan Markle Made A Surprise Appearance For A Wonderful Reason

The Duchess of Sussex delivered a moving speech to honor the "quiet heroes" of the pandemic.

The Duchess of Sussex doesn't go on many official outings like she did as a working royal, but Meghan Markle made a video appearance on Sunday during CNN Heroes: An All-Star Tribute special to honor the "quiet heroes" of 2020.

"In a year that has been universally challenging for everyone, I'm inspired by the stories of compassion in our communities," Markle said during the special on Dec. 14. "Across the country, people have put their own needs aside to come together and support the collective well-being of those around them."

During CNN's annual special, which honored those working on the frontlines of the pandemic as well as those working to keep their communities connected while social distancing, the Duchess of Sussex reflected on how the coronavirus pandemic "seemed to change" everything overnight, impacting families across the nation in an instant.

"But in the face of this devastating reality, we also saw the power of human spirit and remarkable ways that communities respond in challenging times," she said. "We saw the good in people, in our neighbors, and in entire communities coming together to say that they would not stand by while our neighbors went hungry."

"Tonight, we are celebrating these quiet heroes, some of whom I know and others that we applaud from afar," Markle added. "These individuals stood up and made sure the most basic needs of our communities were met. They made sure those around them did not have to suffer in isolation. They nourished their neighbors in more ways than one."

Markle and her husband, Prince Harry, stepped in to help as well. Since moving to California in March, the couple has been actively giving back to those in need. They helped deliver meals to people with serious illness in April, helped prepare meals (and even baked bread) through Los Angeles based charity, Homeboy Industries, in June, and handed out school supplies with charity Baby2Baby ahead of the school year in August.

Like so many, 2020 hasn't been an easy year for Markle and Prince Harry. After they stepped down from their positions as senior members of the royal family at the beginning of the year and moved to the United States, Markle revealed she suffered a miscarriage in July. "I knew, as I clutched my firstborn child, that I was losing my second," she wrote in a powerful essay published for The New York Times in November, going on to say that "this year has brought so many of us to our breaking points."

Markle ended her appearance on CNN's special on a hopeful note, highlighting how the good in people serves as a reminder that we'll get through this. As she put it, "... they showed us, all of us, that even in the darkest times, when we come together, we have the power to remind someone else there is hope, and that we will be OK."