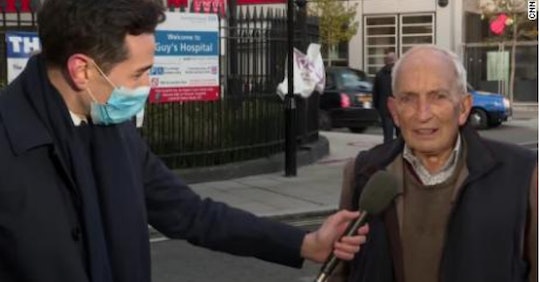 "Well, there’s no point in dying now when I’ve lived this long, is there?"

The family of Martin Kenyon didn't know that he was planning to drive himself to the hospital to get vaccinated against the novel coronavirus. He took it upon himself, and the 91-year-old grandpa's interview after his COVID vaccination is perhaps the most comforting bit of news about the vaccine the internet has seen to date. The British grandfather was so matter-of-fact about the vaccine that his interview with CNN ended up going viral and being oddly comforting.

The United Kingdom is the first country to start rolling out the new vaccine from drugmaker Pfizer and Germany’s BioNTech in an attempt to stop the virus that has killed 1.5 million people across the planet in the past year, according to the Associated Press. Outside of trials, the first person to receive the vaccine was 90-year-old Margaret Keenan at University Hospital Coventry, according to the BBC, but Kenyon was not far behind her. On Tuesday, Kenyon was interviewed as he left Guy's Hospital in London after receiving the vaccine and told CNN's Cyril Vanier that he simply "rang up Guy's Hospital," a place he knows very well because he's lived in London "most of my grown up life."

Kenyon went on to describe his greatest struggle with the vaccine; he had a "rather nasty lunch" at the hospital and was late because he "couldn't find a d**n parking spot." Still, he wanted to receive the vaccine for a few reasons. "I've got granddaughters and I want to live a long time," being one reason. And the other? "Well, there’s no point in dying now when I’ve lived this long, is there?"

A grandfather who received the vaccine says it didn't hurt at all.

As far as the vaccine went, Kenyon reported that "it didn't hurt at all. He added, "I didn't know the needle had gone in 'til it had come out."

Kenyon's family didn't know that he had gone to receive the vaccine, according to USA Today, but would tell them when he returned home. But considering his interview has been viewed more than 5 million times, they might already know.

Social media users are loving Kenyon's straightforward, plain-spoken attitude about the vaccine, with one person writing, "What a charming man. At 91 drove himself to the hospital in London, arranged to get the vaccination, had a 'nasty lunch; got inoculated, received a card as proof, and has no intention of dying now. Yes, interview wins the day."

Kenyon spoke to The Guardian about his social media fame and don't worry, it's definitely not going to his head. He said he found the interview "deeply boring," which seems in character.

People all around the world are feeling emotional about the vaccine. A little elated, a little worried, a little hesitant. So, whether or not it was "deeply boring" to Kenyon, it was a great comfort to see a 91-year-old man just get on with it.

More Like This
New Study Finds Brains Of Teens Who Lived Through The Pandemic Aged Faster
Pinterest Predicts Their Top 2023 Trends In Parenting, Beauty, Fashion, Home, & More
Viral Reddit Post Asks If A Toddler Can Watch Cartoons Without Headphones On A Plane
This Year's White House Holiday Decor Features Wooden Cutouts Of The Biden Family's Pets