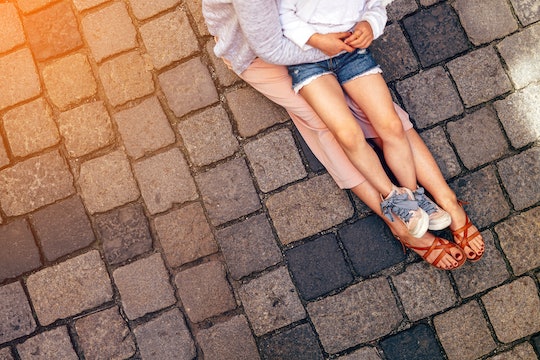 Who's Getting Abortions? Mothers. 59% Of Abortion Patients Already Have A Child.

Contrary to many political narratives, women are thinking of their children when they choose abortion.

There are few more contentious political or ideological debates than that of abortion. And, as with many divisive subjects, misconceptions abound. Among them, the idea that there are women who have abortions and women who opt instead for motherhood. “Smile! Your mom chose life!” is a slogan that can be found on bumper stickers and billboards all over the country. But while this dichotomy may exist in the popular imagination, it does not reflect reality. According to research from the Guttmacher Institute, 59% of women who have abortions already have at least one child. Of that number, 33% have at least two children.

These statistics from 2016 support the Institute’s earlier research from 2004 showing that many abortion patients chose to terminate a pregnancy because remaining pregnant would interfere with their ability to care for dependents. (This research from 2004 also found that 40% of respondents cited that they were done with childbearing, as opposed to just a third of those who said they were not yet ready to have children.)

Other factors, of course, compound this statistic, namely poverty – 75% of abortion patients were poor or low income. In a country with no guaranteed paid maternity leave, universal healthcare, and sky-high childcare costs, this is easily understood: the USDA cites that parents can expect to spend over a quarter of a million dollars raising their child (not factoring in education or other care beyond the age of 18).

All this, of course, doesn’t even take into account America’s astonishing maternal mortality rate (higher, and getting higher, than that of any other so-called “developed country”) and the risk of leaving children motherless. Not surprisingly, the same demographics seeking abortion are those most affected by this grim statistic. Economics also don’t factor in the emotional cost of raising a child, though, certainly, the two can be connected.

An intertwining of concerns and circumstances are often at the heart of a person’s choice to get an abortion — as nearly a quarter of American women will do before they’re 45. And for 59%, experience and knowledge play a vital role. These people know what it is to carry a pregnancy to term, give birth, and be a parent. They know their family, their body, their limits, and their own mind. In this case, we must trust that mother knows best.

More Like This
Dr. Jill Biden Just Delivered Some Frank, But Powerful, Advice On Motherhood
New York Can End Religious Exemptions to Vaccine Mandates, Says A Federal Appeals Court
A New Survey Shows 74% Of Women Would Drain Their Savings On Maternity Leave
A Teen Was Body-Shamed By Matt Gaetz. She Raised Over $700,000 For Abortion Funds.