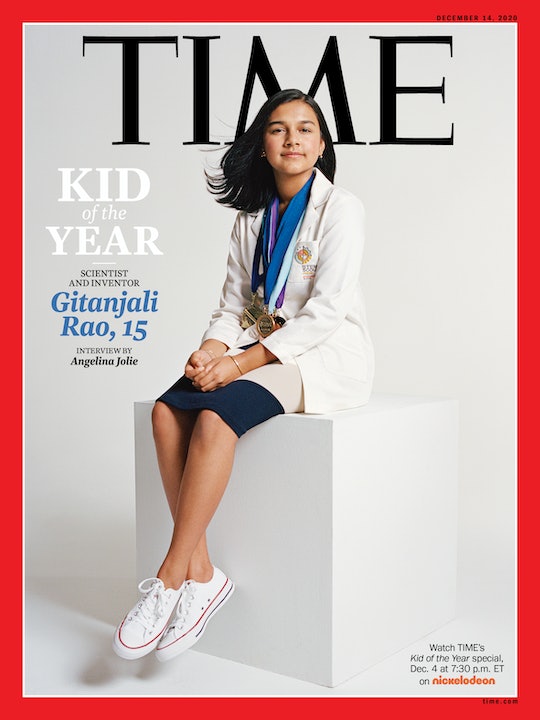 The 15-year-old invented a device capable of detecting lead in drinking water.

In recognizing extraordinary young people actively working to make a positive impact in their communities, Nickelodeon, TIME for Kids, and TIME named Gitanjali Rao as Kid of The Year. At just15, Rao is already an accomplished inventor and scientist whose work seeks to improve the lives and health of, well, just about everyone. Now, she's not only looking to solve some of the world's biggest problems but inspiring others to do the same by creating a global community of young innovators.

"I don't look like your typical scientist," Rao told Angelina Jolie in an interview for TIME's Kid of The Year issue released on Thursday. "Everything I see on TV is that it’s an older, usually white man as a scientist. It's weird to me that it was almost like people had assigned roles, regarding like their gender, their age, the color of their skin."

The lack of diversity and representation that Rao saw in science inspired the teen, who now lives in Colorado, to tackle a new project. "My goal has really shifted not only from creating my own devices to solve the world’s problems, but inspiring others to do the same as well," Rao told Jolie. "Because, from personal experience, it’s not easy when you don’t see anyone else like you. So I really want to put out that message that anybody can do it. If I can do it, you can do it, and anyone can do it.”

While inventing ways to solve world problems may not be easy, Rao certainly has a knack for it. Over the last few years, she's used science and technology to tackle everything from water contamination, opioid addiction, and cyberbullying. In fact, she told Jolie that she's been thinking about how science and technology can be used to create social change since she was in the second or third grade.

After learning about the 2014 water crisis in Flint, Michigan, and watching her own mother resort to sending samples of their water to the Environmental Protection Agency (EPA) after at-home test strips proved faulty, Rao, then 11, was inspired to invent Tethys. The device uses carbon nanotubes to instantaneously detect lead in drinking water. With it, Rao won the Discovery Education 3M Young Scientist Challenge in 2017 and made Rao national news. Marvel even modeled a superhero after Rao for its Marvel's Hero Project.

Since inventing Tethys — which Rao continues to work on in hopes it will soon be available for use in homes and schools — Rao has also developed Epione, a device capable of detecting opioid use disorder by testing protein in body fluids, and Kindly, an app and browser extension that uses artificial intelligence and natural language processing to detect and prevent cyberbullying.

Rao and TIME's other top 2020 Kid of The Year finalists and honorees will be recognized Friday in the first-ever Kid of The Year TV special. Celebrities like Kristen Bell, Billie Eilish, Chris Hemsworth, Malala Yousafzai, Simone Biles, and more will join host Trevor Noah in surprising the top five honorees and celebrating their work. Your family can catch the Kid of the Year TV special Friday at 7:30 p.m. ET/PT on Nickelodeon, TV Land, TeenNick, and Nicktoons.