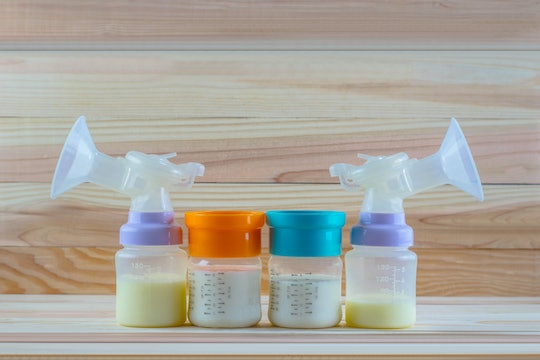 Have you ever thought about how odd breast pumping is? Like, who came up with the idea to create a machine that sucks milk out of human beings? The folks who created these strange machines probably didn’t think about how weird and uncomfortable and cow-like they make us breastfeeding moms feel. Then again, maybe they did. Either way, it's hard to explain what breast pumping is like, especially to people who will never experience it themselves. In fact, there are things my partner can’t understand about breast pumping, no matter how much I tried to explain or how many times he watched me pumping away for the benefit of our son.

When I was pregnant I had planned on breastfeeding my son exclusively and for at least the first few months of his life. Then reality happened and, between his NICU stay and my own physical problems with feeding, my only choice was to pump breast milk and supplement with formula. I’d bought a small, single breast pump as a backup prior to my son's birth, but I wound up mostly using a hospital-grade pump I was able to rent from Women, Infants, and Children (WIC) instead. It was faster and easier, to be sure, but it was also bulky and annoying to carry around.

That was just the tip of the iceberg when it comes to how annoying and inconvenient pumps can be, and that's nothing to say of the feelings associated with pumping itself. I don’t think my husband really understood how cumbersome it all was, but that doesn't mean I didn't try to explain over and over and over again.