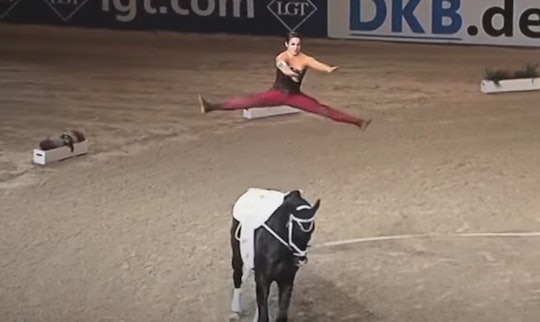 As the 2018 PyeongChang Winter Olympics continue to captivate the attention of the world, curious viewers may find themselves looking up some pretty random Olympic trivia online. "What country has won the most Olympic medals?" "What's the most dangerous Olympic event?" "What are some of the most obscure Olympic events?" I know that last one sent me into an internet rabbit hole from which I couldn't escape. Because to be completely honest, there have been some odd events in the past. So without further ado, here are some seriously weird Olympic events that no longer exist. Spoiler alert: It's not difficult to figure out why, because many of them will probably leave you scratching your head.

If you're like me, the idea of pairing cross-country skiing with target shooting seems like the most random combination of talents. And yet, the biathlon is alive and well. And seriously, table tennis is an Olympic event? Yep. A highly competitive one, at that. But let's move beyond these slightly out-of-place events and skip right to the straight-up bizarre. Because if you're not scratching your head, shouting, "Whyyyy?!" to the universe after reading this list, then I'm seriously worried about you, my friend.

Let's take a look at now-defunct Olympic events of years past.

If you're unfamiliar with this, ahem, unique talent, it's exactly what it sounds like: Jumping and doing other acrobatic moves on a horse's back. Pretty wild, huh? Apparently, equestrian vaulting was only ever an official Olympic event in 1920, Business Insider reported. That year, only three countries — France, Germany, and Sweden — took part. That was the only year the event was held at any Olympic games.

According to Business Insider, the first and only time horse long jumping was held was at the 1900 Paris Olympics. The majority of horses could make it at least 14 feet. And the winning jump? 20 feet — which happens to be a whole 9 feet and 4 inches shorter than the world record for the log jump for humans.

In 1900, motorboat racing made its first appearance at the Olympics as a demonstration sport, according to Mentalfloss.com. And by 1908, it was a full-fledged event. So what happened? Apparently, the wind in England was brutal for the sport, and many boats ended up filling with water, had engine issues, and other problems that forced competitors to quit.

Shooting at targets is a pretty common thing in the Olympics. However, competitors usually shot at disc-shaped targets called clay pigeons. In the 1900 Paris Olympic games, however, they used real pigeons, TIME reported. After over 300 birds were killed during the vent, officials decided against live targets moving forward.

Yes, for real. But relax. Instead of real bullets, Olympians used bullets made of wax during the 1908 London Olympics — and they shot at dummies, not at each other, according to TIME. Whew!

Back in 1904, competitors of the singlestick event tried to hit each other with a club, Business Insider reported. So it was sorta like fencing. But not really. For the record, there were only three people competing from two nations at the first (and only) Olympic singlestick event — and Cuba won gold.

As TIME reported, the rope climb existed in the Olympic games way back in 1896, during which competitors were judged on form and speed. (After those games, however, the event was simply a race to the top.) The last rope-climbing event was in the 1932 Los Angeles Olympics.

This event almost sounds laughable. I mean, the term "solo synchronized swimming" sounds like a huge contradiction, right? However, the whole "synchronized" part simply referred to the fact that a swimmer's movements were in-sync with the music. Not, you know, themselves. As TIME reported, this event first showed up during the 1984 Los Angeles Games and then reappeared in the 1988 Seoul Games and the 1992 Barcelona Games.

Most people who consider tug-of-war more suitable for something like a middle school field day, or an old-school company picnic. However, this "sport" was once a legit Olympic event Tug-of-war debuted during the 1900 Olympics and ended after the 1920 games, according to TIME.

Apparently, in 1904 there used to be an Olympic event during which competitors simply jumped into the water to see how deep they could dive while keep their arms and legs still. The official depths was read 60 seconds after participants' heads hit the water, according to Business Insider. Considering there doesn't seem to be much actual skill involved in such an event, it's no wonder plunging for depth was only around for that one year.

Although it wasn't an official, medaling event, ski ballet did make appearances at two Olympic Games — in 1988 in Calgary, Canada, and in 1992 in Albertville, France, reported Business Insider. Ski ballet is exactly what it sounds like: Choreographed movements while on skis. Sure it may be bizarre, but it's actually pretty entertaining to watch.

With so many events already on the program for both the summer and winter Olympic games, it only makes sense that some of the least-popular ones would ultimately get the boot. (Still, I think it's pretty cool that there was some level of experimentation in the early 1900s, especially.) Let's just count our blessings that we no longer have to watch Olympians plunging for depth or completing solo synchronized swimming routines.