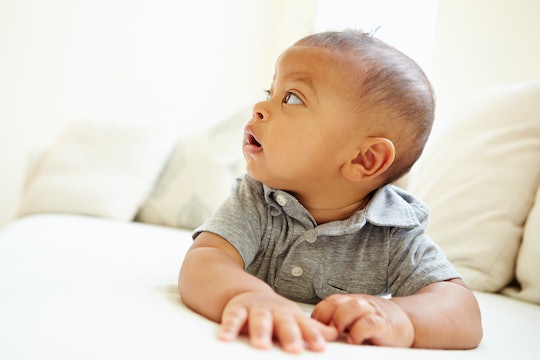 11 Things Your Baby Is Thinking During Tummy Time

I still remember that curious post I saw on my Facebook feed a few years ago. An old high school friend with a young baby shared a picture and made a reference to “tummy time.” I was mildly amused, since it was a cute photo and I like alliteration, but it wasn’t until I was closer to having a child of my own that I caught on and realized that tummy time is an actual thing. Since I failed to grasp the concept the first time, I can only imagine what a baby thinks during tummy time.

Based on the fact that he eventually learned to push himself up, crawl, walk, and climb all over the couches in order to jump off like a rocket ship, I’d say that my son got the hang of tummy time (and relatively quickly, might I add in a totally proud, absolutely not all that entirely boastful way). As a mom I, of course and am happy to say, have the most adorable pictures to prove it. Still, in those early weeks and months, while my kid seemed to have it under control, I was going against a bit of a learning curve. Should I lay on the floor with him? Sit a few feet away to give him space? Put my face right next to his and try to see if his eye color has changed at all since the previous day? If only someone had warned me that parenting would involve tough decisions.

Thankfully, my son managed like the boss baby he was. While I was spending my time wondering how to best facilitate tummy time, I have a feeling my son was thinking something along the lines of the following: