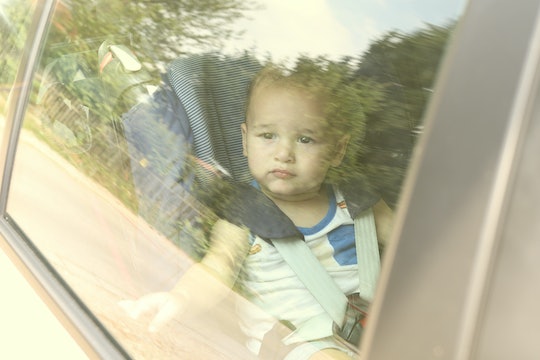 It's the kind of accident that is gut-wrenching to even consider, and one that no parent ever wants to think could happen to them. But every year, dozens of children tragically die from being left in hot cars, and even though health officials are always imploring drivers to get in the habit of checking their back seats, awareness alone doesn't exactly seem to be putting an end to these preventable tragedies. In fact, in a recent interview with Axios, advocacy group Kids and Cars said that 2018 could become the "deadliest" year for child hot car deaths, given that at least 29 have already occurred this year.

According to NoHeatStroke.org, by this point of the summer in 2010 — the year with the highest number of fatalities due to children being left in hot cars — 27 deaths had occurred. And with 2018's record-high temperatures, the danger of this tragic accident is still present for months to come.

As a parent of two young kids, it's hard for me to imagine that I could possibly forget that they were in the car, and I know I'm not even sort of alone in feeling that way. Yet, the statistics show that it's not only possible, it's also the main reason why these deaths occur: data from NoHeatStroke.org has shown that 54 percent of the vehicular heat stroke deaths that have occurred since 1998 were due to children being left in the car accidentally by a caregiver, with the majority involving children under the age of 2.

So how is it, then, that these deaths — 37 per year, on average, according to Kids and Cars — can occur when it feels like forgetting your child in the car must be next to impossible?

In June 2017, University of South Florida psychology professor Dr. David Diamond told NBC News that it all comes down "several competing factors in the brain" that control subconscious action and conscious awareness. Similar to the way that our brains may "go on autopilot," during certain tasks, Diamond explained that something as simple as a change in routine could be the cause — and that all parents are capable of making the deadly error. According to NBC News, Diamond explained:

When you drive home and don’t normally take a child to daycare, when you have a habit and you are normally driving home from work ... well, what happens in all these cases, the parent goes into autopilot mode, which is typically from home to work. It’s in that subset of cases the basal ganglia is taking you on a route that does not include a child.

In a separate article Diamond penned for The Conversation in 2016, he explained that, because of these brain processes, most of the cases where parents have left kids in cars share certain characteristics. And in many of them, the parents actually thought they had taken their children to daycare, or that they were otherwise safe:

A universal observation I have made is that each parent’s brain appears to have created the false memory that he or she had brought the child to daycare. This scientific anomaly explains why these parents went about their routine activities, which even included telling others that they needed to leave work on time to retrieve their child from daycare. Having this "false memory" caused them to be oblivious to the fact that their child had remained in the car all day.

In other words, accidental hot car deaths don't happen because parents don't care enough to pay attention, or because they don't love their kids enough to remember that they're in the back seat. As much as those arguments might make the rest of us feel like we'd never be able to make the same mistake, the reality, according to Diamond, is that it all comes down to brain function — and the 29 deaths that have already occurred this year prove that assuming we're immune certainly isn't helping prevent these deaths from happening.

What could actually help, according to Kids and Cars founder Janette Fennell, is legislation that would require technology to be installed in vehicles reminding drivers to check their back seats. And it might be on the way: Fennell told Axios that The "Helping Overcome Trauma for Children Alone in Rear Seats Act," or the HOT CARS Act, is currently pending approval by Senate lawmakers. In the meantime, though, there are a number of easy steps parents can take to reduce the risk that this could ever happen to them.

In addition to getting to the habit of checking the backseat each time you leave the car, advocacy group Child Help suggests that parents leave objects as reminders — place something of your child's in the front seat to offer a visual cue that they're in the car, and place something of your own that you're used to needing to grab before you leave your car (your wallet, your phone, your purse, even your shoe or some article of clothing you'll obviously need) in the backseat. You can even try leaving a sticky note on your dashboard. As silly they might seem, and as unnecessary as they may be the overwhelming majority of the time, these simple strategies will be more than worth it if they can save your child's life.

Even though it's easy to think that the only thing parents need to do to avoid these tragedies is to pay attention, the reality is that it can happen to anyone — and judging by the numbers, it is happening (and far too often). And honestly, given how often I rely on my car to beep at me when I've accidentally left my keys in the ignition, or if I've popped the trunk and forgotten about it because my son asked me a question and I got distracted, having a back seat sensor that could literally save lives seems like a no-brainer. But in the meantime, it seems to be way past time to start building the kinds of daily habits that can prevent these awful tragedies.