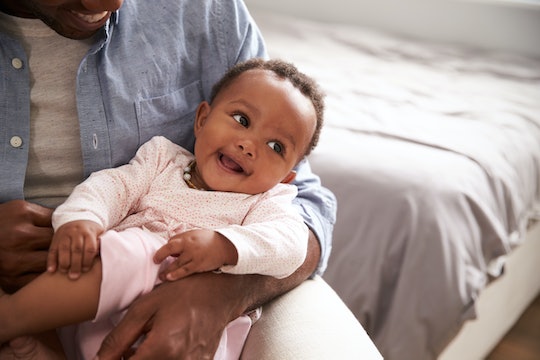 Attention, pregnant women. Before you are sucked into an Etsy wormhole looking for the perfect giant, light up "L" for future baby Liam's room, you might like to know that Nameberry has released a list of the most popular baby names so far in 2019. And some may say the results are cause for raising — if not both eyebrows — at the very least one brow.

The site ranks names according to which monikers have garnered the most page views thus far. And for the first three months of this year, the big winners are Milo and Posie. Which together sounds like a fancy children’s pajama line I can’t afford, or a '90s band with a hit song about dancing in the rain.

Milo is the boy name, in case there is any confusion. Some speculate its newfound appreciation is due to moms who love to weep lusting after Milo Ventimiglia every week on This Is Us. Milo is a strong but playful name, meaning “soldier or merciful.” And — fun fact — it is also a form of drought-resistant sorghum. But I have a hunch that isn’t playing a part in its rise up the ranks.

Posie, meanwhile, is generally a shortening of Mariposa, which of course is Spanish for butterfly. It’s a ridiculously cute name, though I do wonder if it’s also maybe one of those names where parents need to cast their eyes into the future, and think about how it sounds once the child is out of a onesie? Dr. Posie. President Posie. Personally, I tend to picture Posie as a mean senior girl who makes fun of my shoes, but that blame rests solely upon the shoulders of Parkey Posey.

Some other surprises on the list for girls: Maeve, Aurora, and Amara. Amara I find especially interesting, considering how close it is to "Samara," the terrifying child from The Ring. I'm guessing today's parents either haven't seen this film, or simply don't plan to style their daughter's hair combed straight down into her face.

Some of the more unusual names on the boys' list include Silas, Finn, and Jasper. Which are all kind of old-timey and Dickensian, and make me suspect a children's waistcoat craze can't be far behind. Will tweed knickers be the new pull-on joggers? Only time will tell...

But Nameberry says these rankings can in fact be a good predictor of what’s to come, and can give parents an idea of what is gaining steam in popularity. Will Aurora be the new Olivia? This time next year, if a mom yells “Silas!” across Chuck E. Cheese, will half the little heads in the place turn, or just their own child's pizza-smeared face?

Of course, it's impossible to predict how the meaning and feel of a name can change over time. I sometimes think about Suri Cruise, and wonder if her day is plagued with Siri jokes. Or if adolescent Lolas are tortured with tampon delivery quips. Recently, I stumbled across an article about someone named Ada Ball. And because I am five, I of course immediately wondered what her life might have been like had she married a Mr. Sach...

My point being — a name can hold so many different meanings in a lifetime. Which is something no one can predict. Not even the soothsayers over at Nameberry.