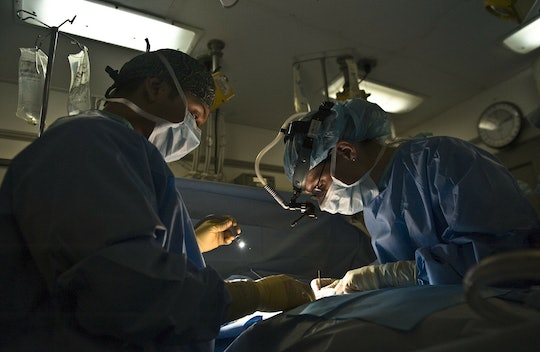 3 Myths About Big Pharma That You Shouldn't Believe

Thanks to the internet, everyone is a know-it-all. The easy access to information allows false beliefs and data to spread far and wide without a second thought. This can include anything from the exact calories in avocado to who built the pyramids (not aliens, guy from the History channel). Conspiracy theories also abound about the pharmaceutical industry — some deserved, and some off-base. In fact, here are three myths about Big Pharma you shouldn't believe.

There are a few widely held but false beliefs about Big Pharma's role in the proliferation of medications and surgical procedures. For example, one theory that has gained traction over the years is that the pharmaceutical drug industry profits big off of vaccines, which is way there's such a push for yearly immunization. Another myth is that physicians intentionally recommend and push for Cesarean sections when the surgery is unwarranted in order to bring in a bigger paycheck. Then there's the idea that birth control "breaks your uterus," and it's Big Pharma's fault.

These myths about Big Pharma aren't rooted entirely in fact. Like any industry, Big Pharma profits from certain medications and certain procedures. But money is not always a motivator. So read on to find out why these myths are just that — myths.

This is actually a complicated myth to unpack. The number of C-sections performed has increased over the last two years; according to NPR, one in three infants are delivered via C-section, compared to one in five in 1996. And, NPR reported, obstetricians are paid a few hundred dollars more for performing a C-section. But there isn't proof that doctors push for C-sections in order to rack in the dough. According to a working paper published in 2013, doctors are most likely not aware of the role financial incentives play in their decision to perform a C-section or not. The researchers behind the paper found that physicians who gave birth were less likely to have a C-section than their non-physician counterparts, which they attributed in part to disparities in education and knowledge. The researchers also analyzed disparities in settings where doctors earned a flat salary; according to NPR, researchers found that surgeons have less incentives to perform C-sections, which suggested that some non-physician mothers who actually needed the procedure didn't get them.

Myth #2: Big Pharma is "breaking your uterus" with birth control.

The myth that birth control causes miscarriage is one often perpetuated by anti-abortion activists and lawmakers. And right-wing web magazines have claimed long-term birth control use can destroy your uterine wall, making pregnancy unsustainable. Of course, that's not how the pill works; birth control, by its very name, stops ovulation, meaning your body is prevented from releasing an egg. The Huffington Post has a great breakdown as to why the assertion that it destroys the uterine wall is unfounded.

Myth #3: Vaccines are just a money-making scheme for drug developers.

Let's put one thing to bed: Vaccines are profitable for Big Pharma. But vaccines are no different than other medications in that sense. According to BBC, most prescriptions drugs make the pharmaceutical industry a lot of money. That doesn't mean you shouldn't vaccinate yourself or your children. As The Atlantic reported in 2015, more families are opting out of vaccination in part because they believe doctors stand to profit, thus pushing immunization. But by buying into this conspiracy theory, anti-vaxxers are allowing long-eradicated diseases such as measles to return, putting public health at risk. In other words: Yes, Big Pharma profits off of vaccines, as they do with any medication, but that's not why medical groups promote immunization. They want us vaccinated because they want us healthy and alive, just like they advocate for chemotherapy for cancer patients so they can also live.

A distrust of the pharmaceutical drug industry is understandable. There are many ways Big Pharma undermines the public good. But, while healthy skepticism is good, buying into these myths is actually detrimental to your well-being.