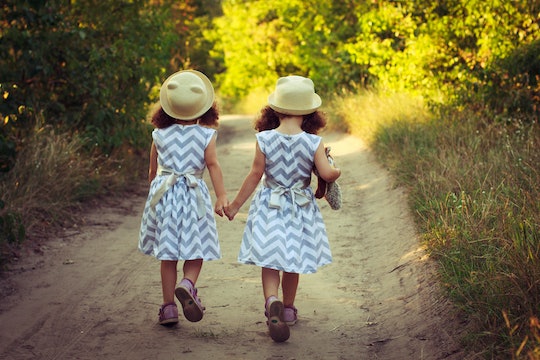 Whether you're hoping for twins, or hoping not to have them, you might be wondering if there is anything to tip the scales in your favor a little. Is there any truth to those old wives' tales about getting pregnant with twins? After all, sometimes myths get passed down from generation to generation for a reason, right?

I have a friend who really wants to knock out two babies with one pregnancy (she's efficient like that), so we started kicking around ways for her to achieve this feat without going the IVF route. We were both amused to learn that the age-old myth that it's easier to conceive multiples if you're older, isn't actually a myth at all — and not jut because of fertility treatments. "[O]lder women have higher levels of a hormone called FSH, prompting greater likelihood of having fraternal twins," according to WebMD, reporting on a 2006 study by researchers in the Netherlands that was originally published in Human Reproduction.

Hmmm... it looks like those old wives might be on to something. Here are 4 more theories about conceiving twins that may not be totally scientifically proven, but sure are fun to indulge in, that is, if you're trying to go for a double.