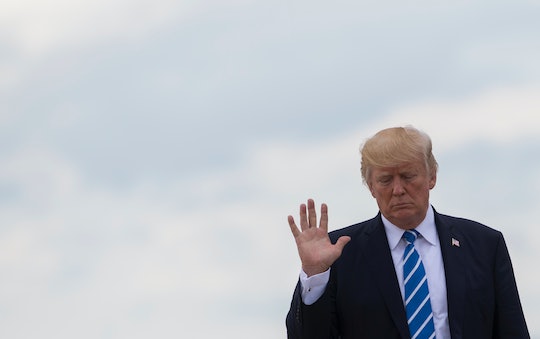 It's no secret that the past eight months have been stressful, controversial, and difficult for many Americans across the country. Since the results of the 2016 presidential election became a reality, the United States has been embroiled in a series of frantic tweets, combative press conferences, and protests that have tested the strength and agility of the nation. And, unfortunately, it seems that not a day goes by without at least one bombshell announcement from the White House. One of the latest pieces of news to send shockwaves? President Donald Trump has dealt a major blow in funding to an Obama-era sex education program. But, there are ways to help girls who may be at risk after Trump cut funding for teen pregnancy prevention programs.

In case you missed the initial news, the Trump administration has officially announced that it would stop funding a crucial program that seeks to lower the rate of teenage pregnancy in the United States. Per Axios:

The Department of Health and Human Services' Office of Adolescent Health recently notified 81 grantees that it would be discontinuing Obama-era funding under the Teen Pregnancy Prevention program (TPP) — which helps educate teenagers on how to avoid unwanted pregnancies.

The programs that were on the receiving ends of the cuts were initially set to get funding through 2020, as part of a five-year program. However, HHS has now indicated that those funds would end next year. So, are there any programs that could really use your help now? And are there other ways to assist at-risk girls?

In short, yes. And here are four ways you can help out, now that some seriously important programs are losing their funding:

Donate To The Center For Innovative Public Health Research

One of the programs set to lose funds from the HHS cut is the Center for Innovative Public Health Research. The center's many programs all seek to improve public health through technology. One of their more prominent features includes texting empowering messages to teenage girls, as its website states:

This program will be delivered in the format that is closest and most familiar to teen women: texting. Text-messaging is cost-effective and will allow for speaking directly to diverse female youth across the country.

You can donate to the Center for Innovative Public Health Research here.

Donate To The Institute of Women and Ethnic Studies

Another one of the programs that will be impacted by HHS' recent cuts is The Institute of Women and Ethnic Studies, which specifically works with "teenagers affected by Hurricane Katrina and screened for PTSD," according to Axios.

In particular, The Institute of Women and Ethnic Studies runs the "Believe in Youth – Louisiana (BY-LA)" program which "strives to empower youth to change their behavior to reduce their risk of becoming infected with HIV/AIDS and other STIs, and significantly decrease their chances of unintended pregnancies."

You can donate to The Institute of Women and Ethnic Studies here.

So, yes, they could definitely use your help. Donate to Planned Parenthood here.

As The Hill noted, funding could potentially be redirected back to TPP programs, should the motion pass in Congress. Although a "spokesman for the office of the assistant secretary of health, did not specify how that funding would be used if appropriated, only that HHS would “continue to review the evidence and determine how to better structure this program, should the U.S. Congress decide to continue its funding.”

So, get out there and call your representatives. Your voice could actually make a difference — it doesn't hurt to try.

In reality, there are a plethora of organizations that could use your help right now. So, while it may seem like there's nothing you can do to stop this from happening, there most definitely is. Whether it's to donate, spread awareness, or call your representative, you can make a difference and help these vital programs stay up and running.