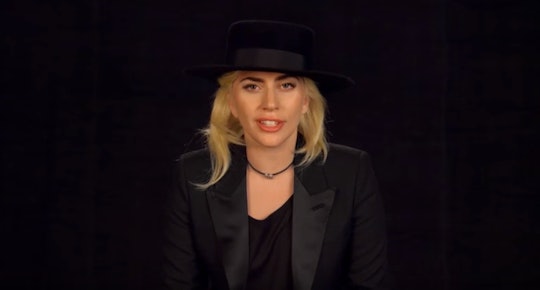 Earlier this month, 49 people were killed when a gunman opened fire at an LGBTQ nightclub in Orlando. In the weeks following that shooting, celebrities have channeled the collective grief and frustration felt by their fans into calls for better gun safety measures and more support for the LGBTQ community. But there’s a danger that, as time passes, the public will forget the lives and stories of the people who were killed that morning. So, in a powerful tribute to the victims in the Pulse shooting, producer Ryan Murphy and the Human Rights Campaign brought together 49 celebrities to honor the 49 Orlando victims. And this heartbreaking 18-minute short film makes it impossible to forget the people lost in that tragedy.

In the aftermath of a mass shooting, there’s often extensive coverage and speculation about the attacker: everything from the shooter’s family background, friendships, and social media accounts gets picked apart in an effort to figure out their motives and connections. And while understanding the attacker may be necessary, the danger is that the people whose lives were taken can be forgotten — their achievements and aspirations lost to all but their close family and friends. But after the gruesome June 12 mass shooting at Orlando’s Pulse nightclub, many were determined to break that cycle.

Ryan Murphy — the Emmy award-winning director and producer behind American Horror Story, Glee, and the upcoming series Katrina: American Crime Story — was one of those looking for meaningful ways to help after Orlando, according to a statement posted on the Human Rights Campaign website. Murphy teamed up with writer Ned Martel and Human Rights Campaign president Chad Griffin to craft a plan to channel the anger and altruism many in the industry were feeling into a project that effectively honored the victims. Speaking to Billboard magazine, Murphy said that the team called on their contacts in Hollywood to narrate biographies for each Pulse victim.

The result was a moving short film featuring familiar faces like Lady Gaga, Kerry Washington, Matt Bomer, and Sarah Paulson. In the clip, each star narrates a short history — almost a eulogy — about one of the victims. The project took an emotional three days in space donated by FOX Studios in Los Angeles, according to Billboard, and came together with the help of Murphy’s considerable in-house support team. Still, getting authentic, powerful stories about all 49 victims could have been a barrier for the project. Martel told Billboard that the strong, ongoing coverage by local Orlando news outlets made the task achievable:

We really relied on the legacy news organizations that spent time meeting these families at the site and at the hospital. The Orlando Sentinel did an extraordinary job. They had a full obituary for each person, which their reporter did a video encapsulation of as well.

According to the HRC website, the project will be part of the advocacy organization’s #StopTheHate campaign, a push to address the dangerous connection between anti-LGBTQ hate and the need for more common-sense gun violence prevention measures. Though the HRC is the largest (and arguably the most influential) LGBTQ advocacy organization in the country, tackling that connection was a first for the group, according to that statement. Murphy added that driving a national conversation on gun violence prevention was new, but necessary territory for Hollywood, as well:

I think the topic of gun control had become something that everybody was talking about, particularly in this community, but now I feel people are very mobilized. It's madness that 90 percent of our country wants stricter gun control laws and yet we're held hostage by this select group of Republicans. I think people are getting angry about it.

This is a full list of the victims in order of how their stories appear in the short film, according to the HRC website:

And these are the entertainers and performers who tell the victims’ stories, in order of appearance:

The emotional tribute was posted on the Human Rights Campaign YouTube channel on June 29. Watch the short film in its entirety here: