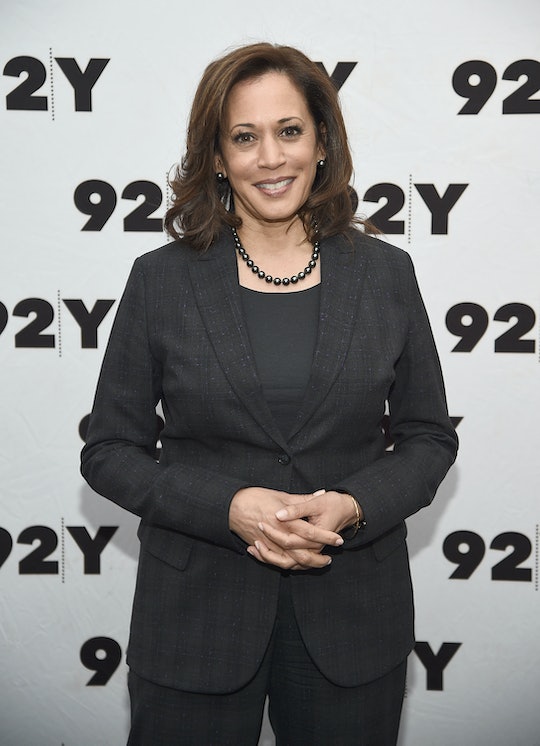 Kamala Harris Is Running For President In 2020, & Here's What You Should Know

There's no question that the 2020 presidential election is going to be majorly high stakes, and with President Donald Trump already reassuring his supporters of another win, Democrats are likely going to take the process of choosing a candidate very seriously. A handful of individuals have already announced they are officially running, while others, like Massachusetts Sen. Elizabeth Warren and New York Sen. Kirsten Gillibrand, have announced exploratory committees. On Monday though, California Sen. Kamala Harris officially threw her hat into the ring, according to CNN, and while the Democrat is already fairly high-profile, here are 5 facts to know about Kamala Harris as she prepares her campaign for the nation's top office.

Harris shared her announcement on social media Monday morning by tweeting a short video of herself explaining the foundations of her campaign, and it's clear she's ready to hit the ground running. The senator explained she was building her platform on the notion of American values like "truth, justice, decency, equality, freedom, [and] democracy," and urged Americans to "[lift their] voices to fight" for what really matters. The video also noted that 54-year-old Harris will be formally kicking off her campaign with a rally in her hometown of Oakland on Sunday, and while the country will likely soon hear a lot more from the president hopeful, here are some valuable things to know about who she is.

As with any candidate, Harris will no doubt be expected to prove she has the knowledge and experience to run the country, but unlike some others who have built careers as politicians, Harris' background is actually rooted in law enforcement.

A Howard University grad with a law degree from the University of California, Harris first started out at the Alameda County District Attorney’s Office prosecuting child sexual assault cases, before serving two terms as District Attorney of San Francisco beginning in 2003, according to her campaign website bio. Harris then served two terms as California's Attorney General, before ultimately being elected to the Senate in 2016.

Given that Harris' campaign slogan is "For The People," it's likely no surprise that she's taking a grassroots approach to fundraising, shunning donations from powerful corporate PACs, and instead appealing to average Americans for contributions. On her website, supporters are encouraged to make a donation via ActBlue — as little as $10.

It's a pretty wise strategy: Vermont Sen. Bernie Sanders famously raised millions for his campaign thanks to small donations from average Americans, according to The Atlantic, and this year, a number of Democrats campaigned on the promise that they, too, would be shunning corporate funding. And while it's yet to be seen how voters will respond, it'll definitely help push the idea that she'll actually be representing Americans, instead of being beholden to corporate interests.

3. She's The Daughter Of Immigrants

At a time when issues surrounding immigration and border security are causing major public outrage and division, Harris' background as the daughter of immigrants already sets her apart. In her recent memoir, The Truths We Hold: An American Journey, Harris wrote about being the daughter of an Indian mother and a Jamaican father who came to the United States to pursue university degrees, according to NBC News, and she's also spoken about attending civil rights marches with her parents as a child, according to Mother Jones. In other words? It's no surprise she's taken aim at the president's anti-immigration rhetoric, calling his proposed wall a "vanity project" in a recent interview with Good Morning America, according to ABC 7 Chicago, and criticizing him for being xenophobic.

She hasn't been afraid to formally call out the Trump administration's policies and push for change though: Harris has pushed for Congress to "enshrine protections for DREAMers," for example, according to Vox, and she was also the first to call for the resignation of Homeland Security Secretary Kirstjen Nielsen when the Trump administration began separating families at the border as part of its "zero tolerance" border policy.

4. She's Not Afraid To Be A Trail-Blazer

At this point, Harris is likely used to pushing through barriers. According to The Washington Post, she was the first black woman elected as district attorney in San Francisco, and when she was later elected attorney general of California, she became the first woman, the first African-American *and* the first Asian-American to hold the position.

That definitely doesn't appear to be lost on her: in an appearance on Good Morning America on Monday, she explained that she'd specifically timed her announcement to coincide with Dr. Martin Luther King Day, and said, "I'm honored to be able to make my announcement on the day that we commemorate [Dr. King.]"

5. She's All About Raising Up Women & People Of Color

Though Harris is clearly leading by example just by breaking through the barriers and showing others it can be done, it sounds like she's also trying to ensure she's helping build a path for others. At a talk at Atlanta’s Spelman College in October, according to New York Magazine, Harris reflected on all the times she'd been discouraged from advancing her career, and said she was often told, "It’s not your turn, it's not your time, there is nobody like you who has done that before, it’s going to be a lot of work." Harris' advice? "Don't listen," and pursue your goals anyway.

She's doing more than simply offering advice though: according to New York Magazine, Harris has "quietly prioritized supporting a sprawling group of young people of color running for office," and it sounds like it comes from a specific feeling of wanting to pay it forward. She said, "My mother used to tell me, 'Kamala, you may be the first to do many things. Make sure you are not the last.'"

There's no question that, even despite her popularity, Harris will definitely still have her work cut out for her as she forges ahead in an attempt to win the presidency — or even just the Democratic nomination. But from the sounds of it, she's not at all unaware of the fight ahead of her. And it's likely she'll put up a good one.