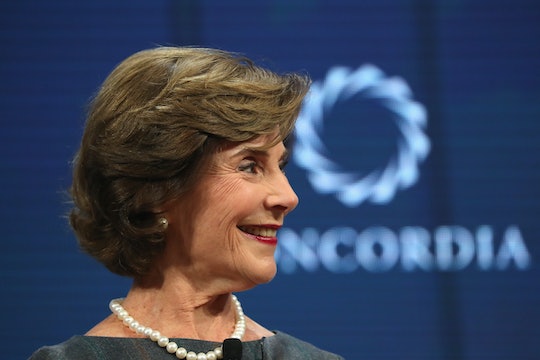 It's no secret that President Donald Trump and many people in his administration are taking a strong stance against undocumented immigrants. Their zero-tolerance policy has resulted in several thousand children reportedly being separated from their undocumented parents at the border and placed into government custody or foster care. Like many other people around the world, former First Lady Laura Bush is horrified by the stories and the images of children separated from their parents. So, she wrote an op-ed for the Washington Post calling out the immorality of the policy. There are so many must-read quotes from Laura Bush on Trump's border separation policy, and it's clear that President George W. Bush's wife wants to see the crisis remedied immediately.

On Friday, the government reportedly said that 1,995 children were separated from 1,940 adults at the United States-Mexico border between April 19 and May 31, Reuters reported. Combined with previous statistics of family separations between October 2016 and February 2018, that brings the total amount of separations to almost 4,000 kids, Reuters reported. The border separations became even more concerning last month, when U.S. Attorney General Jeff Sessions announced a zero-tolerance policy for adults found attempting to enter the country illegally, stating that they would be criminally charged, TIME reported.

Here are five of Laura Bush's quotes from her Washington Post op-ed.

Bush explained that she understands why law enforcers would want to protect the United States' borders — but that separating children from their parents has crossed a line. She wrote:

I live in a border state. I appreciate the need to enforce and protect our international boundaries, but this zero-tolerance policy is cruel. It is immoral. And it breaks my heart.

2. "These images are eerily reminiscent of the Japanese American internment camps of World War II."

Bush suggested that the border separations will go down in history as utterly shameful, similar to the way people remember the Japanese American internment camps of World War II. She wrote:

These images are eerily reminiscent of the Japanese American internment camps of World War II, now considered to have been one of the most shameful episodes in U.S. history. We also know that this treatment inflicts trauma; interned Japanese have been two times as likely to suffer cardiovascular disease or die prematurely than those who were not interned.

3. "It is our obligation to reunite these detained children with their parents."

The first lady pointed out the hypocrisy of the situation, considering America's so-called values, writing:

4. "There are good people at all levels of government who can do better to fix this."

Even though Bush and her husband have not been in office since 2009, she feels positive that there are people in Washington who can remedy the horrific situation. She wrote:

I moved away from Washington almost a decade ago, but I know there are good people at all levels of government who can do better to fix this.

5. "Can we not as a nation find a kinder, more compassionate and more moral answer to this current crisis?"

Bush finished her essay on another positive note, stating that she believes there is a better solution:

In 2018, can we not as a nation find a kinder, more compassionate and more moral answer to this current crisis? I, for one, believe we can.