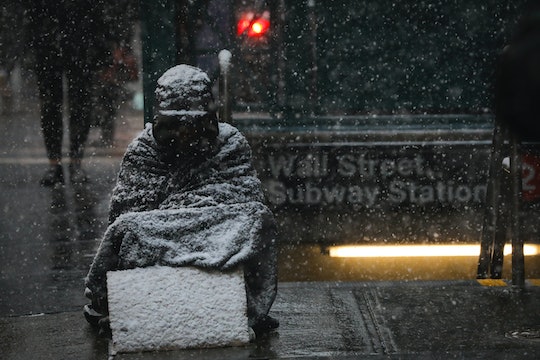 5 Ways To Help People Stay Safe During The Polar Vortex

An anonymous donor paid for 70 homeless people in Chicago to stay in a hotel during the polar vortex, as The Chicago Tribune reported. The generous gift will save these people from freezing temperatures (20-25F below) and possibly death. Although this act of kindness might be too grand for the average person, there are plenty of easy ways to help people affected by the polar vortex.

If you've seen photos of Chicago in recent days, you were probably struck by the appearance of frozen Lake Michigan and the city's frost covered streets. Although these viral photos can be mesmerizing — and even beautiful, in some cases — they are a reminder that millions of people are suffering right now.

Most of the people at risk are homeless, a reality that sharply came into focus after one of the propane tanks used to heat an encampment near the Dan Ryan Expressway Chicago exploded, as WLS-TV reported. City officials had to close the makeshift camp, which meant the 70 people who sought refuge there were without shelter.

"The Salvation Army was prepared to welcome approximately 70 individuals who were affected by the explosion, but was notified those services were not necessary as the individuals were already being taken of," Jackie Rachev Director Of Communications at the Salvation Army Chicago Metropolitan Division told CNN. "We are thrilled that they are safe and warm."

If you're inspired by this incredible act of generosity, here are five ways ways you can help residents affected by the polar vortex.

if you live in an area affected by the polar vortex, chances are you might come across a person in need of help. If this happens, stay calm and call the non-emergency number 311. Calling this number will you give information about the nearest warming centers and shelters.

If you locate a person sleeping outdoors, however, the situation warrants a 911 call, as HuffPost reported.

“This is really a historic event in terms of the dangers it presents to people living outside. Every year people lose limbs ― ears, toes ― to frostbite," John Tribbett, street outreach manager at Minneapolis’ St. Stephen’s, explained to HuffPost.

There are plenty of GoFundMe fundraisers to donate to during this time, including "Help The Homeless in Chicago During Polar Vortex," an effort led by Khloe Thompson, an 11-year-old in Los Angeles.

"All of the money raised will go directly to the Salvation Army Chicago. The Salvation Army announced they will have mobile feeding and homeless outreach crews making over 30 stops throughout Chicago to help those on the streets," the fundraiser states. "They will also feed people utilizing warming buses and provide other important services over the next several days."

One of the most helpful things you can do during this time is to donate to homeless shelters in need of clothing (think gloves and outer layers) and other important supplies. Some shelters have organized Amazon wish lists, while others have issued suggestions to the public.

One great idea? Donate public transit cards because many people can't afford to transport themselves to shelters, according to The Cut.

Getting the word out about resources and safety tips is easy to do. One person in Des Moines, Iowa, for instance, tweeted that public libraries in the city are teaming up with an organization to provide "warm shelter for the homeless." This is the type of tip could end up saving someone's life, and it's important to spread this kind of info wide and far. No tip is insignificant.

Don't Forget About The Animals

It's important to also keep an eye out for animals during this tough time. If you must take your pet outside, dress them in layers and don't keep them out for too long.

Additionally, consider volunteering at a local shelter in need of help. Many shelters are overrun at the moment, so fostering or adopting is another option to think about.

No action is too small when you're dealing with life-threatening temperatures, so please consider any of options above if you want to help out those affected by the polar vortex.