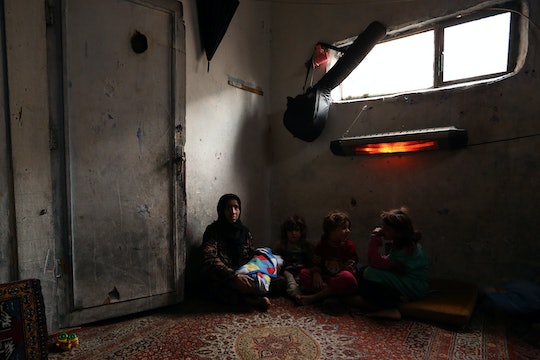 The current crisis in Syria is absolutely devastating. Every day, innocent lives are taken, including those of both Syrian children and adults who have found themselves caught in the middle of the continuing conflict. And on Saturday, in the most recent appalling humanitarian update, 68 Syrian kids were killed in a bus bombing as they and thousands of others were being transported to safer regions of the country.

On Saturday evening, according to CNN, "a blast" struck a convoy of buses filled with at least 5,000 people leaving their towns to escape their pro-regime Shia villages for regime-held zones of Aleppo. In total, the blast killed 126 people, according to CNN, with 109 of those people being evacuees and the rest being aid workers and rebels guarding the convoy. Perhaps worst of all were the number of innocent children — 68 of them killed in this attack — who were just trying to get out of the way of warfare.

The bombing occurred at a checkpoint where "the handover of evacuees" was due to take place, according to BBC News; The outlet reported that a vehicle loaded with food was handing out items to children when it exploded. So far, according to the BBC, no one has claimed responsibility for this horrific attack. According to Reuters, this is the deadliest bomb attack in Syria in almost a year.

As the BBC noted, this exchange of evacuees was part of a Four Towns deal. The Four Towns deal was an agreed upon exchange by the government that involved the transfer of Shia populations in two Syrian towns for the exchange of Sunni rebels and civilians out of two others, according to The Independent.

A spokesperson for the United Nations Secretary-General António Guterres, released a statement following the attacks:

The evacuations were being conducted in accordance with the agreement pursuant reached to the Four Towns agreement, covering Foah, Kefraya, Madaya, and Zabadani. We call on the parties to ensure the safety and security of those waiting to be evacuated. Those responsible for today's attacks must be brought to justice.

During his Easter Sunday Mass sermon this week, Pope Francis made sure to address the crisis in Syria, calling on the strength of god and saying words that everyone can take to heart:

Especially in these days, may he sustain the efforts of all of those actively engaged in bringing comfort and relief to the civil population in Syria, prey to a war that continues to sow horror and death. And yesterday, the latest despicable attack on refugees which caused a number of deaths and injuries.

The Pope's words are incredibly powerful, as are the words of those who witnessed or are investigating this weekend's horrific round of atrocities. Hopefully soon, those words will spur more action in the global community. Because no family or child, no matter who they are or where they're from, should have to face such a tragedy.