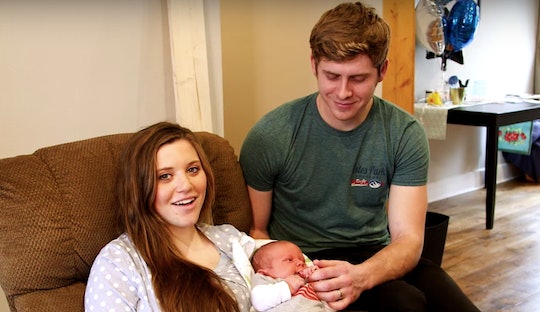 The Duggar family is nothing if not known for their traditions. In all of the years that fans have watched them living, loving and parenting on their TLC shows 19 Kids and Counting and Counting On, they've drawn attention for the specific ways they do everything from grocery shopping to clothing to courtship. Though they're all important, these seven Duggar pregnancy and birth traditions are definitely the most interesting, and will make you feel so excited for the next generation of babies on the way.

There are some traditions the Duggar kids have carried on from their parents, and others they've left behind. Seldom will you see a Duggar naming their kids with the same first letter again, and with the age of social media upon us, sharing their journeys to parenthood is different as well.

Fans might recall when Jessa Duggar "broke" family tradition by being the first to share a photo of her bump. (CafeMom reported that her sister Jill, by contrast, hid her stomach in photos throughout her pregnancy.) Now, it's common to see all of the women sharing "bumpdates" as their pregnancies progress.

Though the Duggars are traditional, they aren't afraid of some change. And here are some of their most fascinating pregnancy and birth traditions that prove just that.

1. The Kids Were Given "J" Names So No One Would Feel Left Out

The most obvious tradition of all (the "J" baby names) actually began with them choosing a few Biblical names that just happened to start with "J," according to a blog post they wrote on TLC's website. After Josh, John-David and Jana were born, and after that Michelle and Jim Bob Duggar didn't want their fourth child to feel left out. Alas: a tradition was born.

2. Their Baby Names Should Be Meaningful

Though none of Jim Bob and Michelle's children have carried on the tradition of having all of their kid's names start with the same letter, it's clear they've developed their own in making sure to choose names that are somehow meaningful to them. Often, after the birth of a baby, the parents will post a video or blog explaining why the name was chosen, as Ben and Jessa Seewald did, according to TODAY.

Joy-Anna and Austin also revealed their reasoning for choosing the name Gideon for their son, Entertainment Daily reported, and it is because of a Biblical reference.

3. They Try For A Home Birth

Though it doesn't always work out the way they plan, many of the Duggar women have opted to attempt a home birth first, according to People.

4. They Have A Back-Up Plan For Home Birthing

While many of the women have tried to start labor and birth at home, on multiple occasions they have ended up in the hospital anyway. Jessa was taken in for a hemorrhage after giving birth to Spurgeon, Hollywood Life reported, and Joy-Anna opted for a hospital birth due to complications, In Touch Weekly reported. Something similar happened to Jill after she was in labor for 70 hours, according to People.

Not only has every Duggar announced their pregnancy themselves on social media platforms like Instagram, but it is also common for other siblings to repost their photos and share the announcement as well. Whether it is to spread the word or just share their excitement, it's a super sweet thing to do.

6. They Keep Fans Updated With "Bumpdates"

Each adult Duggar has their own social media following, and are sure to update fans with photos of their kids as they grow. However, during pregnancy, it's common to see many of them posting week-to-week updates, sharing how big the baby is getting and how the mom-to-be is feeling, like Jinger Duggar has been recently. Certainly there's nothing that gets fans more excited for the new addition.

7. They Seemingly Don't Choose Godparents, As Far As Fans Are Aware

There's been a lot of speculation about whether or not the Duggars have godparents in their family, according to People. As religious (and open) as they are, it would seem as though it would be a bigger deal, but they don't really mention it. Though they haven't confirmed whether they do that or something else, it's notably not a part of their new baby process, at least publicly.

All in all, it seems all of the Duggar kids are forging their own way as new parents, whether that means adhering to traditions or not. What matters most is that they're doing what works best for them, and showing the world that there's no one-size-fits-all when it comes to starting your own family.