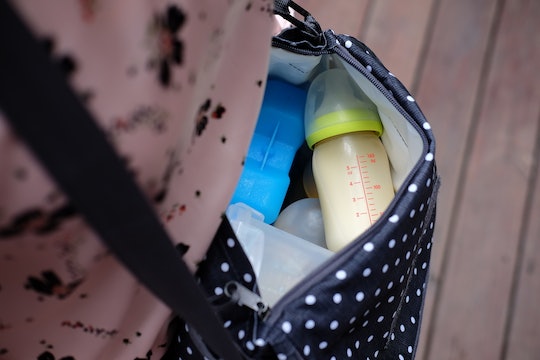 Remember These 7 Rules When Traveling With Your Breast Milk

Although the agency means well, it's hard to love the Transportation Security Administration. The TSA is the source of a lot of frustration in airports — they're the ones who've forced us all to transfer our liquids into little bottles and empty our pockets out into plastic bins. Having to toss out a fancy shampoo you forget was in your carry on is one thing, but what about your breast milk? Before you get in the security line at the airport, you're going to want to know the rules about traveling with breast milk.

Recently, a father took to Reddit to complain that a TSA agent allegedly tossed breast milk out of their bags. Although his family had never had a problem before, this particular time, the agent examined the milk, the ice packs, and simply threw it out, according to the post. They allegedly refused to allow the infant to drink the breast milk right then and there, instead of letting it go to waste.

So what gives? That was the father's question, too. He wrote on Reddit:

So here is the question: why, if the same expressed milk from my wife was used, in the same bottle, in the same container and with the same ice packs, on different dates, and we did not have a problem before, did they throw [away] this particular milk?

While he awaits a response from the TSA, here's what you need to know about traveling with breast milk so that you can ensure no one throws your infant's lunch away before you get on board.

Your Breast Milk Is Exempt From The 3-1-1 Rule

The 3-1-1 rule was instated after 9/11 to help you remember that all passengers are allowed 3.4-ounce bottles of liquids in a 1-quart size, clear plastic bag, and only one of those bags is allowed per person. But since breast milk is food for your kids, you're allowed to have more than that. You are allowed to have larger containers and they don't have to fit into a quart sized bag.

Simply inform the TSA officer at the beginning of the screening process that you're carrying breast milk or formula in your carry-on bag, and they will typically screened by X-ray, according to the agency's website.

Make Sure Your Ice Is *Actually* Ice

You're allowed to have ice packs with you, but they have to be frozen solid. If they're at all slushy, they're going to be subject to further inspections, according to the TSA website.

Your Breast Pump Doesn't Count As A Carry-On

Your breast pump is a medical device, and therefore doesn't count as your one piece of carry-on luggage. But you're likely going to have to repeat that over and over again as you make your way through the airport, according to ChildrensMD.org.

But, Your Cooler Does

Alas, your breast pump gets an exemption, but your breast milk cooler will count as a carry-on bag. So you'll have to figure out a more efficient way to pack if you don't want to check your luggage.

Inform An Agent When You're In Line

The TSA will most likely test your breast milk, along with juices if you have them. According to the agency's guidelines, this whole process goes a heck of a lot smoother when you inform the agent at the beginning of the process.

Yes, You Can Opt Out Of The X-Ray

Although the Food and Drug Administration says that the X-ray is safe for food and juices, you can still opt out of putting your kid's meals through the process if you wish. This is straight from the TSA website:

Officers may ask you to open the container and/or have you transfer a small quantity of the liquid to a separate empty container or dispose of a small quantity, if feasible. Inform the TSA officer if you do not want the formula, breast milk and/or juice to be X-rayed or opened. Additional steps will be taken to clear the liquid and you or the traveling guardian will undergo additional screening procedures, to include a pat-down and screening of other carry-on property.

You Can Carry Milk No Matter What

You are allowed to travel with breast milk even if you don't have your baby in tow with you.

People have varying experiences at different airports and with different airlines when it comes to breast milk. Whether it's a lack of training or just bad practices (like not allowing a woman to skip to front of line so that her milk's ice doesn't turn to slush before the screening process), women and families do sometimes have a rough time getting their milk pass the TSA.

For a smooth experience, make sure you follow the rules and possibly even travel with a copy of the website or screenshot it so that you can defend your milk in real time.