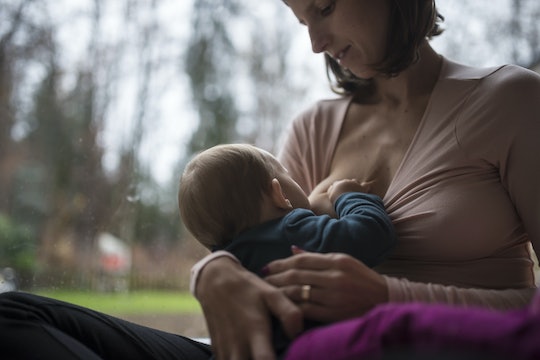 7 Subtle Red Flags My Breastfeeding Anxiety Was A Larger Problem

Breastfeeding doesn't come easily to every mother who tries it. It definitely didn't for me, but I was so unprepared to face any difficulties that I felt blindsided when things didn't go as planned. Those first few hospital feedings were disastrous, but I was convinced that with a little practice and patience, the issues would resolve themselves. In other words, I overlooked the subtle red flags my breastfeeding anxiety was a larger problem, hellbent on living up to what I believed nursing should look like. If I had trusted my gut, I would have been kinder to myself and postpartum life would've been much easier as a result.

To be honest, I knew almost immediately that something was wrong. When I was in the hospital, nurses and lactation consultants pressured me to practice certain holds and latch techniques, even when I doubted whether or not I even wanted to breastfeed. It was one thing to plan to nurse, but another thing to actually put those plans into action. After my daughter's birth I felt like I was a stranger in my own body, yet I was expected to breastfeed at any cost. I was uncomfortable, stressed, overwhelmed, and exhausted. Still, I thought I owed it to my daughter to try, even if I suffered as a result.

I ended up suffering from postpartum depression, and I have no doubt that the anxiety breastfeeding caused played a part. It's one thing to support breastfeeding moms (we should!) but it's another to pressure moms to breastfeed and at the detriment of their mental health. So with that in mind, here are some subtle red flags I completely ignored when dealing with breastfeeding anxiety: