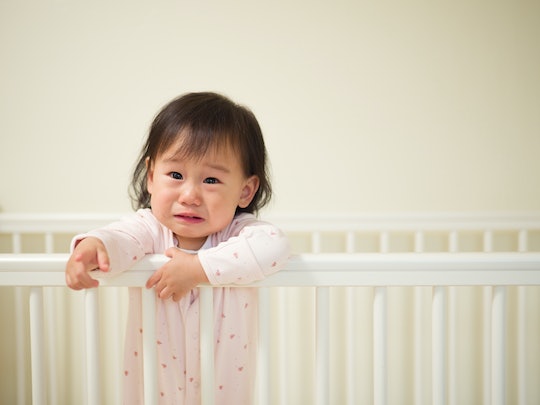 7 Things Parents Should *Never* Do During A Sleep Regression

Why is it that just when you think you have this whole sleep thing conquered and you're finally getting those coveted eight hours, the sleep regression comes? Sometimes its onset is at about four months, sometimes six months, sometimes 18 months, and sometimes it just happens out of nowhere. After you rule out fever, teething, a dirty diaper, or any other possible discomfort, you can consider it officially a sleep regression. While there may be ways you can try to help get your baby back into his routine, there are definitely things not to do during sleep regression.

Baby Center described sleep regression as "temporary periods when babies or young children don't sleep as well as they have in the past." There are many physiological reasons your baby might lose their steady sleep habits, but it's not really considered an official regression until it's happening for a week or two. Some parents will notice their baby is waking more often than usual and then a week after that starts, the baby hits a new milestone, like crawling or pulling themselves up. Baby Center listed other possible causes as everything from separation anxiety to their sleep cycle shifting to a change in temperature in the room. Regardless of the cause, it can throw off a very hard-won sleep routine and make you feel like you are starting from scratch again.

The Baby Sleep Site considers five hours of sleep, without feeding, to be a full night's sleep. A tired mama is not always a patient mama and sometimes we will try to do the easy thing in the moment to get us through the night. However, it might be helpful to keep in mind this list of things to avoid so that your short-term problem doesn't become a long term one, because you need to get them back on track. Sleep, for mom and baby, is hugely important for successful parenting.