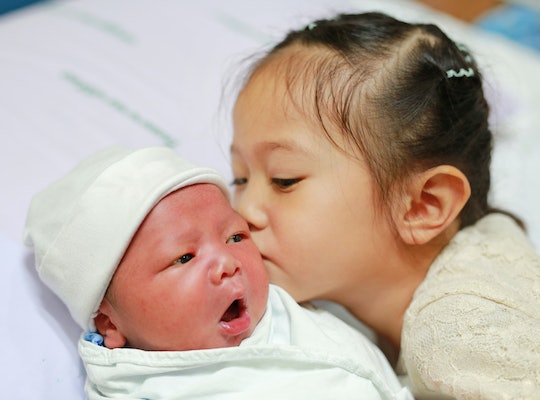 7 Things Only The Best Older Sister Does

My daughter turned 5 when she was gifted a baby brother. In fact, I missed her fifth birthday party because I was recovering in the hospital. Right after her party, she and my husband came to visit me and our new baby in the hospital. And the moment she saw him, she instantly took on the persona of a sibling, and immediately did things only the best older sister does. She gently touched his little fingers, carefully smelled his head, and delicately kissed his cheeks. She had been waiting for him for a while, or "forever" in kindergarten terms, and was so happy she finally got to meet him.

The first week home was definitely an adjustment for us as a family. Our daughter followed the baby around, asked hundreds of questions, and wanted to be near us both every second of every day. By the second week postpartum, however, she mildly lost interest. We all kind of got into the groove of being a family of four. Her interest in her brother grew as he grew. When she finally wasn't scared of touching him (she said she was afraid she'd hurt him because he was so little and she was so big), she started coming over to him and touching his feet. She's play with his toes and rock him in his rocker and stroller. We started going on walks together, which is when she insisted she should push him because he "is her brother, after all."

As an older sister to a brother myself, I can feel how my daughter feels about her brother. I have spent much of my life worrying about my brother, helping my bother, and fighting my brother's battles. I have taken on the role of my brother's parent in order to help him with one thing or another more times than I can count. My brother and I are very close, which is how I would love my children to be.

So, while my daughter isn't always the most well-behaved child, her love and affection for her brother almost make her other digressions meaningless. She is the best big sister because of the following: