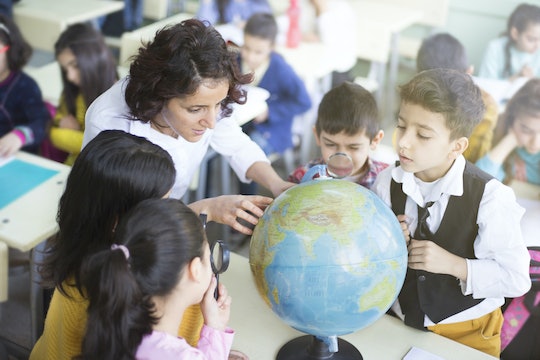 Holiday Or Not, What Teachers *Actually* Think About Columbus Day Is Surprising

Columbus Day is coming up, but there's a lot more to this holiday than a break from work or school. In fact, it isn't just about Columbus sailing the ocean blue and discovering America in 1492. The things teachers want you to know about Columbus Day may reframe the holiday completely.

A brief chat with my friends in education revealed that wow, they are not fans of Columbus and his federal holiday at all. One pointed me toward the Abolish Columbus Day Campaign on Teaching For Change, which is a movement to abandon the holiday entirely. That sentiment was pretty prevalent among other educators, I found.

As it turns out, there's a lot more to Columbus Day, the figure of Columbus himself, and the way the holiday is perceived in modern America. To learn more, Romper spoke with Christopher J. Williams, M.A., Certified Secondary History Teacher and Private Tutor with Varsity Tutors. A full-time history teacher in Denver, he provided tremendous insight into the reality of the Columbus story, particularly the man's terrible mistreatment of indigenous peoples. From their point of view, Columbus' arrival marked the beginning of a terrible tragedy, the effects of which are still felt to this day.