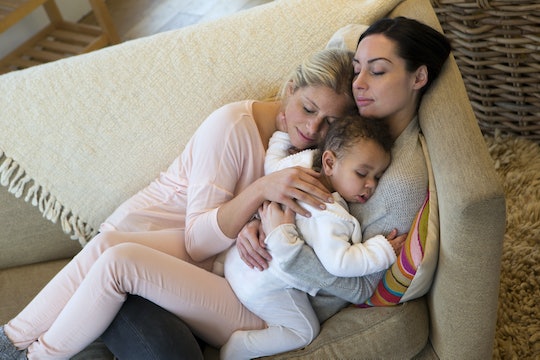 My partner and I were actually separated for this last, hellish, toddler-level sleep regression. We spent the two weeks 3,000 miles apart and could not have possibly predicted that our daughter was going to hit a sleep regression during this time and before we booked our tickets to visit our parents. But you can bet we won't be traveling to separate places in the near future or at any point when our daughter has any risk of a sleep regression. (Which might be until she's about 7, but still.)

Toddler sleep regressions are a whole other animal compared to baby sleep regressions. I don't remember negotiating with a tiny toddler terrorist screaming from the other room that she needs a drink and her lovey and a book and a banana and a sausage during any of the last sleep relapses, for example. So it's safe to say this 18-month sleep regression from hell taught me a lot about my marriage, including the following:

More Like This
The 4 Main Parenting Styles & Which Is Best For Kids
What Exactly Is The Ferber Method? The Sleep Training Approach, Explained
Baby Growth Spurts: When They Happen & What To Expect
Festive Mommy & Me Holiday Nail Ideas To Try