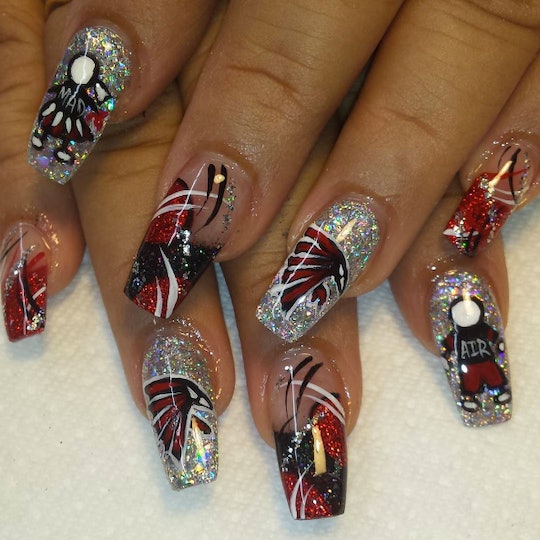 8 Falcons-Themed Manis That #RiseUp For The Bowl

Atlanta Falcons fans had a huge reason to rejoice this year, as they celebrated the team entering the Super Bowl for the first time since 1999. What made the playoff win even better was the fact that it was the last game played in their legendary Georgia Dome stadium. As someone who lives in Atlanta, seeing the outpouring support for the team throughout the city was incredible to witness. From car decorations to hair dyes, everyone made an effort to #RiseUp. To add to the support, I've seen many women sporting Falcons-themed manicures as a way to show their home team love.

To be quite honest, I don't think I've met a set of fans as serious about their team as the Falcons fans. Everyone who I've ever met that calls themselves a fan of the team are diehard, and plan to be that way for the rest of their lives. The best thing about it is most of the fans are women who show their support to the team any way they can. Since this is really a big year for the team, I can only imagine what type of creative nails, hair, and outfits Atlanta will bring out for Super Bowl Sunday.

Are you a big Falcons fan, too? Get some inspiration with these nine nail designs to help you #RiseUp for the culture this Super Bowl Weekend.