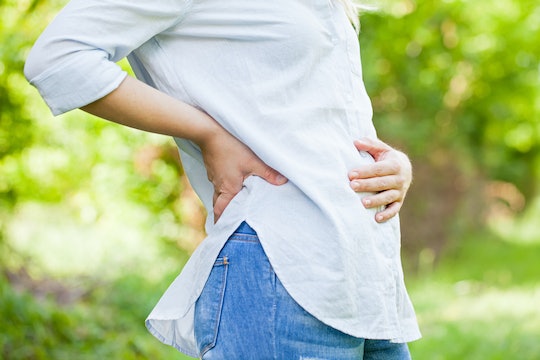 I wanted to be pregnant for a long time before it actually happened. Obviously I wanted to be a mom, but I also just really wanted to experience the physical sensation and changes of pregnancy itself. I fantasized about rubbing my growing stomach and, yes, had my maternity photo shoot all planned out way before I held a positive pregnancy test. I was super excited about the whole experience, which means there are things I'm so glad I didn't know about the first trimester before I got pregnant. If I had known then what I know now, I have a feeling I wouldn't have been so, um, thrilled.

Now, don't get me wrong: I don't think this particular batch of knowledge would have affected my decision to have a baby. It certainly would have caused me to worry way more than necessary, though, and probably would have stifled how excited I was about simply being pregnant. After all, the symptoms I was sure to experience were unavoidable, but that didn't make them less intense, overwhelming, or terrifying.

The 40 weeks (more or less) of pregnancy can seem like a long time, but when I look back I swear it went by so quickly: especially that first trimester. There was always a new stage to complete, with its own developmental milestones to chart, and before I knew it the whole thing was over and it was time to meet my baby. So with that in mind, here's what I'm so thankful I didn't know about the first trimester. Sometimes ignorance really is bliss, my friends.