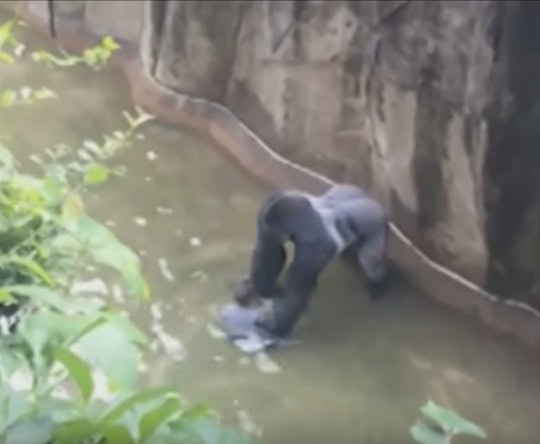 You've probably heard about the story of the 4-year-old boy who fell into a gorilla enclosure at The Cincinnati Zoo and Botanical Garden on Saturday, May 28, after which zoo personnel fatally shot 17-year-old Harambe, a 400-pound western lowland gorilla. If you haven't, well, that's exactly what happened. A toddler passed through multiple barriers, fell 10 feet and, for fear that the child's life was in danger (a point still being argued), the endangered gorilla was shot. The situation has sparked passionate debates and public outrage, and there are (undoubtably) a few thoughts every mom had when she heard about Harambe and the boy who fell into his enclosure, subsequently setting the internet (and the country) on fire with endless opinions and finger-pointing.

I, personally, avoided talking about the situation entirely, whether it was on the internet or, well, anywhere else. It's so easy to get swept up into the all-encompassing emotions of it all. I can understand all sides, as an animal-lover and as a mother. I can understand how a mother may lose sight of her child, for even a second, and how that second can be long enough for something terrible to happen. I can understand why animal rights activists are so upset that a beautiful, regal creature was killed for something it didn't do, something completely out of its control, something that didn't warrant death. I can, well, just understand. Which is why it's difficult to voice an opinion without feeling torn in a million different directions. Basically, my heart aches, and I'd imagine most mothers (and, you know, people) across the country feel the same way.

Which is why, while there is no end to the number of people who are weighing in on what happened and/or what should have happened, mothers seem to have a unique reaction to the entire situation. Once you're a mom, your perspective does shift and your ability to put yourself in someone else's shoes does (or should) grow and you view the world in a slightly different way, for better or worse. So, with that in mind, here are eight things every mom thought when she heard about the 4-year-old-boy falling into the gorilla exhibit, because there isn't a single situation in life that is cut and dry.