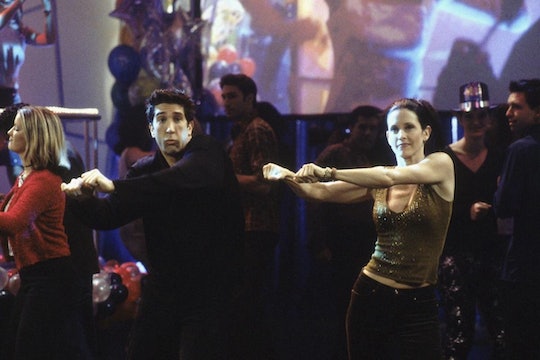 Move over, Cupid! Everyone knows New Year's Eve is really the holiday all about nabbing that overhyped, midnight smoocharoo. And unfortunately, every time a new year rolls around, so does the pressure to have a good time. Every December we scramble to purchase sequins, glitter, and anything shiny so that we look our best on one of the worst nights of the year. Yes, I say worst because somehow we always manage to set such high expectations for the holiday that reality seems lackluster in comparison. Even though plans, friends, and kisses might not turn out how you hoped this year, here are 9 episodes to watch on New Year's Eve that will remind you that you're not the only one immune to FOMO.

I've come to think of New Year's Eve like The Purge. People either go out and paint the town red, or lock themselves into their homes hoping no one will come knocking. Whether you're the former or the latter doesn't matter though because you can either sit back and relax, or pregame to the installments listed below. Regardless of your plans, or lack thereof, it's always nice to ring in the New Year with your favorite TV family members — don't even front, Friends' Joey is much more fun to be around than your dull cousin, Nick. So get your 2017 glasses on, and party horns at the ready so we can kick off this lineup.

Monica and Ross's dance routine at Dick Clark's New Year's Rockin' Eve is all you need to start your 2017 with a chuckle... and a chicken dance.

2. How I Met Your Mother

Ted Mosby tries to give his friends the perfect New Year's Eve by rushing to five parties with limo chauffeur, Ranjit, accompanying the gang's festive, yet awry night.

Watch the coworkers come up with New Year's resolutions that Michael quickly tries to sabotage. Don't expect too much from the resolutions though, as Dwight's is to "meet a loose woman."

The final episode of the series is appropriately the last day of the '70s. If you want to not only celebrate the new year, but also have yourself a good cry, this New Year's finale will leave you teary-eyed.

Jay brings Gloria, Claire, Phil, Cam, and Mitchell to a hotel in Palm Springs that he loved in his youth. The hotel isn't as he remembered, and the clan seek other ways to remedy the situation, while Haley babysits the kids in LA.

"The One with All the Resolutions," Season 5, Episode 11

Each member of the squad makes a resolution, but all of them pale in comparison to Ross': doing one thing a day he has never done before—which includes going on a date in leather pants.

This show is a bit dated, but the kiss scene is memorable. I hope one day someone will land on my lips the way this dude does as the clock strikes midnight.

Perhaps Pretty Little Liars took the train party idea from Boy Meets World, either way the episode reminds us that you can make the best out of any New Year's Eve situation. Even if that best means throwing a party on a stalled subway.

OK you caught me, this one isn't a TV episode, BUT the New Year's kiss between Ashton Kutcher and Amanda Peet is just too good not to name.

So go forth and get your kisses tonight, but like these episodes preach, don't let unrealistic expectations ruin would could make for a happy new year.

No matter who you're with, or what happens on New Year's Eve, don't worry about it. It will soon all be a remnant of the past, so just focus on making 2017 count!