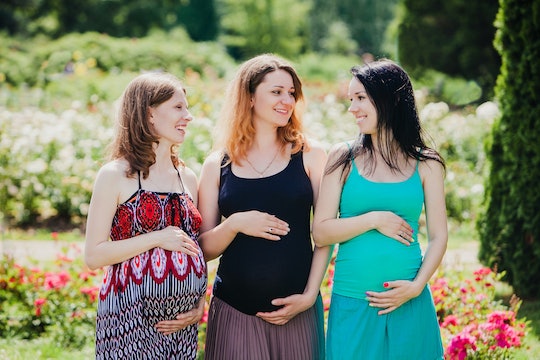 What Not To Say When A Mom Parents Differently

To be completely honest, I thought the "mommy wars" thing, was a joke. OK, maybe I thought it was real, but it was certainly dramatized and overplayed, right? Wrong. I had no idea what I was getting into until I found myself being verbally attacked by a "friend" for having an epidural. An epidural, you guys. Medicine. To help me birth a baby. I really couldn't understand. So, in no time at all, I realized there are more than a few things moms need to stop saying about moms with different parenting styles. And by "stop saying," I mean, "Seriously never, ever say these things again because come on, can't we all just get along?"

I had no idea how upset people — from family members to friends to internet strangers — would be about the parenting choices I made. Then again, and now that I've been a mom for all of two years, it kind of makes sense. This parenting thing is scary. I mean, a lot is on the line and there is a ridiculous amount of responsibility at play. We all just want to be validated in our choices, and told what we're doing is the "right" thing to do. Sadly, sometimes the need to feel like we're good parents come out in a nasty way; a way that attacks others; a way that makes other moms feel like they're failing when, really, they've just found a different way to go about raising another human being.

So instead of attacking one another for making different choices, we should be encouraging one another. Instead of saying the following things, us moms need to remember that our need for personal validation shouldn't manifest itself into judgment or attacks on other people. We're all doing our best, my friends.