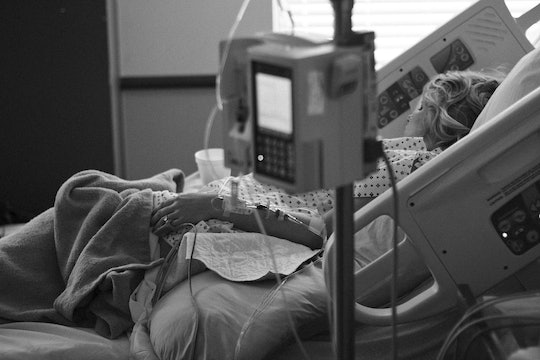 "Do no harm." Every doctor who currently practices medicine is guided by and pledges to uphold the Hippocratic Oath, as it is at the foundation of medical practice. And yet bureaucratic policies, limited funding, and even religious influences have increasingly provided an ever-mounting field of hurdles for doctors to perform their best care for patients. That's exactly what Dr. Jessika Ralph alleged happened to her: her pregnant patient miscarried one of her twins and became sick with two infections before Ralph could treat her, according to Rewire. Due to HIPAA laws, the patient has not been publicly identified, but Ralph has gone on the offensive sharing her concerning story.

Ralph told Rewire that her patient allegedly endured 24 hours of what she believed was an unnecessarily painful labor, but she couldn't intervene because Wheaton Franciscan — St. Joseph Hospital is a Catholic hospital that reportedly bars certain interventions from being performed, and only under strict circumstances. Representatives for Wheaton Franciscan did not immediately return Romper's request for comment.

In Ralph's case, her patient reportedly arrived in distress at 18 weeks pregnant with twins; one twin was miscarried shortly after the patient arrived at the hospital and nothing could be done to save the other. Worse still, Ralph alleged she could do nothing to accelerate the inevitable miscarriage of the second twin until her patient presented two specific signs of infection. As a result, Ralph said her patient labored for more than a day before her second twin was stillborn, unable to survive outside the womb at only 18 weeks gestation regardless, according to Rewire.

Ralph allegations are not unique to the hospital for whom she works. In the United States one out of every six hospital beds is in Catholic hospitals, according to a 2016 report from the American Civil Liberties Union. Catholic hospital medical policy is traditionally guided by specific teachings regarding "human life and dignity," as prescribed by the U.S. Conference of Catholic Bishops. As has been seen elsewhere in both the United States and around the world, religious doctrine as a guideline for medical care has put women's lives at risk.

In 2012, Savita Halappanavar died from septicemia because doctors at the Catholic hospital in Galway, Ireland, to which she went would not perform a termination. Halappanavar was 17 weeks pregnant and actively miscarrying, but hospital policy put the human life and dignity of her dying fetus above its mother's, resulting in a painful and totally preventable death. She was 31 years old.

In Ralph's case, while her patient's life was not at stake, she said it was, at minimum, very bad medicine, she told Rewire.

You’re in this limbo of knowing that the right thing to do is to induce her labor because she is going to get sick. And when we say sick, I mean, it’s not common but they can die, they can become septic and die from something that we could treat and prevent and never have them get ill. How do you tell this patient, in good conscience, ‘I’m waiting for you to get sick?’

For Ralph, it's not just about the issue of best practices for women's health care in Catholic hospital settings — it comes down to that most essential oath to which all doctors should adhere. Of her patient who endured such a reportedly painful and unnecessary ordeal, Ralph said, "I was so worried that she would never trust a doctor again."