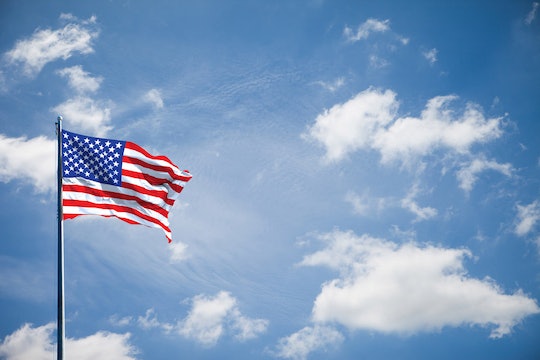 Throughout the past few years, the debate surrounding whether schools should require students to recite the Pledge of Allegiance has garnered national attention. And on Monday, the conversation regarding this controversial topic reached a fever pitch after it was revealed that a sixth-grader was reportedly arrested earlier this month following an argument with his substitute teacher over the Pledge of Allegiance, as Bay News 9 reported.

On Monday, Feb. 4, an 11-year-old boy at Lawton Chiles Middle Academy in Lakeview, Florida, reportedly told his substitute teacher, Ana Alvarez, that he had no interest in standing for the Pledge of Allegiance. The middle schooler allegedly told the sub that the American flag is racist, which supposedly prompted Alvarez to engage in a discussion about living in America. "Why if it was so bad here, he did not go to another place to live," the teacher wrote about her communications with the boy, according to Vox.

The boy reportedly replied, "They brought me here," although it's unclear who the "they" was in reference to.

The teacher reportedly responded, according to Rolling Stone, "Well, you can always go back, because I came here from Cuba, and the day I feel I’m not welcome here anymore, I would find another place to live."

At this point, the substitute called the school's office because she did "not want to continue dealing" with the student, according to NBC News.

Lawton Chiles Middle Academy and Polk County Public Schools district did not immediately respond to Romper’s requests for comment regarding the incident.

After the office was contacted, the situation reportedly escalated. The student was arrested by the school's resource officer after he allegedly refused to "follow multiple commands, repeatedly called school leaders racist, and was disruptive," as Bay 9 News reported.

Additionally, the arrest affidavit alleged that the boy "threatened to get the school resource officer and principal fired and beat up [the teacher]," according to the New York Post.

The child was then "taken to a juvenile detention center and charged with disrupting a school function and resisting arrest without violence," according to Bay News 9.

As for the student, he alleged that he never threatened violence against Alvarez. His mom, Dhakira Talbot, explained that her son is in "gifted classes" and that he was allegedly bullied in the past, as Bay 9 News reported.

"I'm upset, I'm angry. I'm hurt," she told Bay 9 News. "More so for my son. My son has never been through anything like this. I feel like this should've been handled differently. If any disciplinary action should've been taken, it should've been with the school. He shouldn’t have been arrested."

It's important to note that Lawton Chiles Middle Academy doesn't require its students to stand for the Pledge of Allegiance. A Polk County Public Schools public relations specialist told Yahoo Lifestyle that kids can decide to opt out of the pledge if they have "written authorization from parent."

The specialist also revealed that Alvarez, who was reportedly unaware of the stipulation, will no longer sub in the Polk County school district. The official statement reads:

The student was arrested after becoming disruptive and refusing to follow repeated instructions of school staff and law enforcement ... Unfortunately, a substitute teacher was not aware of this ... We are looking into this matter, but this individual will no longer be allowed to work at any of our schools. Our HR department will contact Kelly Services (which provides our substitutes) to further refine how our substitutes are trained.

Another thing worth noting? The Supreme Court ruled in the 1943 case, West Virginia State Board of Education v. Barnette, that students can't be forced to say the Pledge of Allegiance, as it would be a violation of free-speech.

It's unclear at this time whether the charges against the boy will be dropped. Hopefully, Lawton Chiles Middle Academy can work with Lakeland Police Department to reach a fair resolution.