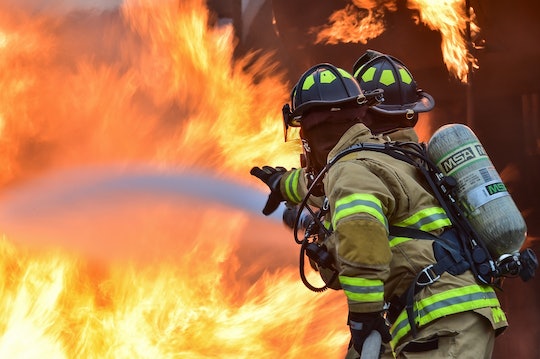 A Spokane Toddler Dies In Fire With His Dog By His Side, & It Is Heartbreaking

Though three children and two adults were able to evacuate the home safely, a 3-year-old little boy remained trapped by the fire consuming his family's home. On Friday night, the Spokane toddler died in a fire with his dog and his teddy bear by his side. Firefighters believe that "the dog stayed behind in an attempt to protect the boy," keeping close to him even as the fire managed to melt the boy's bed frame. "They died together," Spokane Fire Department Assistant Fire Chief Brian Schaeffer told reporters.

The cause of the fire is still under investigation, but it reportedly began at around 11:30 p.m. Across-the-street neighbors Jerry Atabelo and Lori Rayburn called 911 upon hearing screams from inside and witnessing the blaze. Atabelo then hurried to connect his 150 foot water hose, which had been detached for the approaching colder seasons, ran across the road, and "started spraying [the house] down."

Neighbors near the site knew that a child was trapped inside the house while, Atabelo recalls, they continued fighting the fire with the hose from his house. During all of this, a window in the house broke, though it's unclear whether this was caused by the spraying, by the extreme heat of the fire, or from an attempt by a bystander to get to the trapped toddler. "The way the house is configured," Rayburn observes, "it was probably impossible to get to him."

"It melted everything," Schaeffer said. In surveying the toddler's room, he notes: "There was no way to survive that," seeing that the fire in this particular section of the house was "very intense."

Though the home did have a smoke detector, it was without batteries. Fire Chief Schaeffer emphasized that the Spokane Fire Department will provide both batteries and smoke detectors to any homes that need them, working actively to prevent similar situations from happening. Surely, the department and its community members want to do all that they can to prevent further loss of life.

This fire has undoubtedly been heartbreaking for the local community. Currently, the child's death is under investigation by the Spokane Police Department in order to discern how all of these awful incidents transpired. Perhaps the 3-year-old's death will serve as a reminder of necessary fire safety and prevention measures; Ensuring that smoke alarms are prevalent throughout the home, are functional, and that families have fire escape plans are the steps that must be taken.