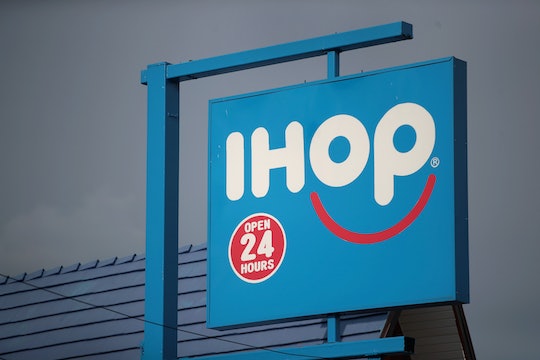 A Stranger Paid The Bill For This Dad Of Twins At IHOP, & Left Him The Sweetest Note Ever

Any parent knows that attempting to go to a restaurant with young kids is a risky endeavor, and as a mom of twins, I'll admit I actually tried to avoid doing it as much as humanly possible while my kids were babies. No matter how hard you try, it's usually messy and stressful, and not even sort of worth it — and if your kids have a full-on freakout, you also have to endure a roomful of side-eye from other diners. But after a stranger paid this twin dad's bill at IHOP, the story quickly went viral on Reddit. And if you've ever had a nightmare restaurant experience with your kids, chances are it's one you'll appreciate.

More Like This
10 Hilarious Tweets That Perfectly Capture What Moms Are Going Through
Vaccinated People Can Ditch Masks. Where Does That Leave Kids?
Here's The Deal With Babies Who Sleep With Their Eyes Half Open
Is The Tooth Fairy Real?

In the post, Reddit user neroiscariot explained that he and his wife were taking their 16-month-old twins on an eight-hour drive to attend his brother's funeral (you definitely don't have to be a parent to appreciate that everything about that sentence sounds like a total nightmare). Halfway through the drive, he wrote that they'd decided to stop at an IHOP — except, well, that didn't go so well. The couple tried their best to quiet their babies to no avail, but while they were doing so, someone in the restaurant decided to help them out. In the thread, the grateful dad explained, "A stranger picked up our tab at IHOP while my wife and I were struggling to keep our twin babies calm. We cried."

The fact that the stranger paid the family's tab is obviously a big deal — I mean, how amazing is that? But whoever did so also went one step further: they also left a note that said, "just breathe, you're doing great." Though that may seem like a small gesture, any parent who has ever felt overwhelmed by their inability to control a chaotic outing can likely relate to how validating that would have felt, so it's no surprise that neroiscariot said it definitely left a huge impact on him. In a later comment, he wrote, “I’m a pretty cynical guy, but, half way through an 8 hour drive with 16 month olds…I needed this.”

It didn't take long for the post to go viral: according to Simplemost, it had earned more than 28,000 upvotes within the first day, and ended up on Reddit's front page. But while many of the commenters left messages about how sweet a story it was, the post also led to a lot of parents chiming in with stories of their own. And one thing that seems pretty clear? When it comes to helping parents with young kids, even the smallest effort can go a long way.

One conclusion that seems to be unanimously agreed upon by the commenters? It's usually the older people who are the kindest. As one user wrote,

We have had older couples tell us it's Okay, babies are fine and we are doing great while eating out. They will also play peek a boo or talk to the kids and us to keep everyone distracted. It's such a huge help when we start getting stressed.

Another shared this sweet story about a toy plane:

Old people are great. An old guy gave my 5 year old a toy WW2 plane in a supermarket when my partner was trying to do the shopping and he was playing up. My boy was so excited to get free shit he was great the rest of the way round the shop. Still plays with the plane most days too.

And then there was this particularly understanding man:

My 7 year old was being a bit obnoxious at the post office the other day and I had to tell her to cut it out when some older gentleman got in line behind us and she was waving her arms across the counter he needed to use. He was like, 'She's fine. I've got 5 kids, don't even worry about it.' I still made her stop but man it felt good to have someone be understanding instead of giving us the death glare.

Another thing the comments section made pretty clear though? There's definitely a reason why moms appear to universally love Target. One user wrote,

Last week I was at Target with my 4 and 2 yo. We were at the checkout and I’m pretty sure I was about to implode because they were acting their age. The cashier noticed, smiled, and said 'Breathe, momma.' It put such a smile on my face and honestly made my day, just knowing someone saw me at a bad moment and 'got it.'

And then there was this gem:

I work at Target, once I saw a guest with a super chill kid and then she was with her two year old having a melt down on the way to the front. She looked exhausted so I offered to carry her stuff to the registers and she actually cried and let me help her. It's amazing how some little acts of kindness can make someone's day when they need it.

Unfortunately, some of the Reddit commenters couldn't help but let the dad in question know that he was obviously the worst for deciding to bring two babies to IHOP (how dare he hope to eat!). But if anything, those comments only further proved why the restaurant stranger's gesture was so moving.

It's no secret that parenting young children is often a real struggle, and there are few things more stressful than trying to manage a meltdown in public. But as this Reddit story proved, there are so many different ways to let frazzled parents know you understand and aren't judging them, and it's something we could probably all do a bit more often. It might not be particularly fun to share a restaurant with crying children, but honestly, in most cases no one is having a worse time than the parents themselves. And spreading a little bit of kindness their way could make a huge difference.