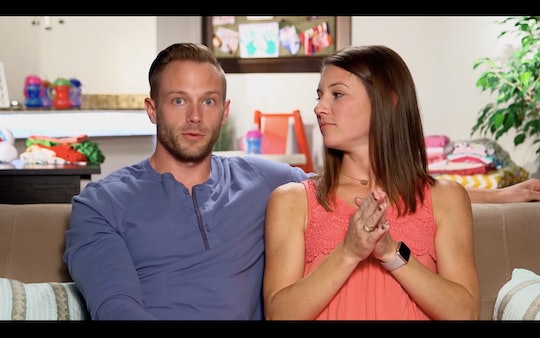 Adam Busby and his wife, Danielle, are taking the world by storm starring in their own TLC docuseries, Outdaughtered. Parents to six young girls, the Busbys have been praised for their openness and outspoken nature, but now they're using social media to discuss one of their heaviest topics yet. Adam Busby's tweets about his postpartum depression affirm that paternal PPD is real and that men who suffer from it aren't alone, which is not something you see every day.

Adam has spoken out on the show several times about his struggles with going back to work after the birth of their quintuplets as well as the emotional toll that changes such as this can take on a father. Apparently, his emotional distress went deeper than we realized. After being prompted by a fan, Adam presented the disheartening truth about paternal postpartum depression, also known as paternal postnatal depression, or PPND: that one in ten fathers struggle with it. The postpartum period comes with a number of adjustments that put dads at risk of developing depression symptoms, something that Adam has experienced firsthand. Romper reached out to the Busbys for comment but has yet to hear back.

Postpartum depression (PPD) is rapidly gaining more national attention, with celebrities such as Hayden Panettiere and Gwyneth Paltrow opening up about their struggles with it. Extensive research on PPD has been conducted in recent years, improving public knowledge of this previously misunderstood mental health issue. Unfortuntely, there is very little research on PPND. Adam Busby has taken up the cause and is spreading awareness in his own way.

An unfortunate side effect of PPND is a tendency towards silence. Men are less likely than women to open up about their symptoms. Without men verbally confirming that there is a problem, it can be hard to determine whether or not PPND to blame for perceived changes after the arrival of a new baby. Outdated gender norms still reinforce the cultural pressure for men to "tough out" hard times and "man up." Will Courtenay, Ph.D., a psychotherapist in Oakland, California and renowned men's health expert told Parents that these cultural pressures are to blame for men's silence about PPND:

So when men start to feel anxious, empty, or out of control, they don't understand it and they certainly don't ask for help.

Detecting PPND in stoic fathers isn't impossible, however. Dr. Courtenay said that a good indicator of paternal PPD is depression in mothers:

Half of all men whose partners have postpartum depression are depressed themselves. Depression in both parents can result in devastating consequences for their relationship and especially for their children.

Per Busby usual, Adam's wife, Danielle, tweeted her support for her huband. She also admitted that she was unaware of his struggles with depression, affirming the statements of experts such as Dr. Courtenay.

Celebrity attention to overlooked issues does a lot to bring about awareness, as seen with the Hollywood discussions of PPD. Adam stated in one of his tweets, "It’s not fun to talk about, but if me talking about this helps any dads out there then it’s all worth it." Gauging by the responses to his tweets, he has already helped people. With continued discussions and research, hopefully we can learn more about PPND and how to help those suffering through it. Until then, thank you for all that you're doing, Adam.

More Like This
Jennifer Lopez Says Blending Families With Ben Affleck Has Been An “Emotional Transition”
Prince Harry Says He’s Worried One Of Prince William’s Kids Will End Up As “The Spare”
The 20 Most Romantic Quotes From Friends
10 Moving & Informative Documentaries About Martin Luther King Jr.
What Parents Are Talking About — Delivered Straight To Your Inbox