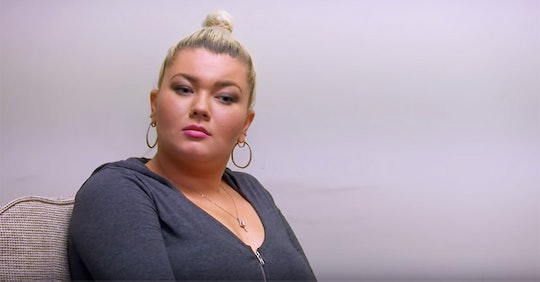 Amber Portwood has opened up about a lot of heartaches during her time on Teen Mom OG. And on last Monday's episode of the MTV series, Amber Portwood talked about her miscarriage, a devastating situation she had kept under wraps for years.

Before Portwood gave birth to her second child, James, in May, she was in a long-term relationship with a guy named Matt Baier. The pairing wasn't the best situation, to put it mildly, and Portwood finally left Baier in summer 2017.

One of the reasons Portwood called it quits? She claims Baier stole money from her. Portwood alleged during an episode of TMOG, according to Hollywood Life:

Within the last three years we’ve been together, tallying everything up, it’s been $120,000 that I have no clue where it’s went. We’re not engaged and I feel like he’s a pathological liar. And I just realized he’s sending his daughter money that’s not even his money!

Although Portwood was open about the couple's many troubles during their time together (alleged theft, cheating allegations, supposed drug abuse), she didn't clue fans in on a miscarriage she suffered at some point in their relationship. But on last Monday's episode of TMOG, Portwood mustered up the courage to share her miscarriage story with viewers.

Portwood decided to open up about the experience after Gary Shirley's wife, Kristina Shirley, discussed her own miscarriage. Kristina told Portwood that she got accidentally got pregnant after tubal ligation (aka getting your fallopian tubes tied), a pregnancy that wasn't viable.

“I never told anybody but like, when I was with Matt I had a miscarriage," Portwood responded to Kristina, according to In Touch Weekly.

Portwood also revealed that she “didn’t hear the heartbeat or anything," nor did she go to the hospital.

Following Portwood's reveal, some people took Twitter to defend her decision to keep the matter private for a few years.

"I never spoke a word to anyone I knew personally of my many miscarriages :/," one fan wrote on Twitter. "Sometimes it’s just not something you want to keep being reminded of and if amber had one maybe it was best to keep it private till this opportunity she had to share with Kristina.."

"Side note: I don’t see anything wrong with Amber sharing her story," someone else said. "Sharing experiences of Miscarriage does bring people together (from experience). It feels easier knowing you’re not alone."

As for Baier, he discussed the miscarriage with Radar Online shortly after the episode aired. “It was a really difficult time for both of us,” he explained. “Even now, it’s difficult to think about.”

Baier made it a point to say he would “never violate her trust and reveal anything about the event that she herself doesn’t want revealed.”

“I promised her a long time ago that anything that happened in our private life would stay private until she wanted to discuss it,” Baier added. “I will always honor that.”

Since the miscarriage, Portwood met her current boyfriend, Andrew Glennon, and the two now have a beautiful son together. And it's nice to see the mom doing so well following this heartbreaking event, a private matter that she opened up about when she was ready to.