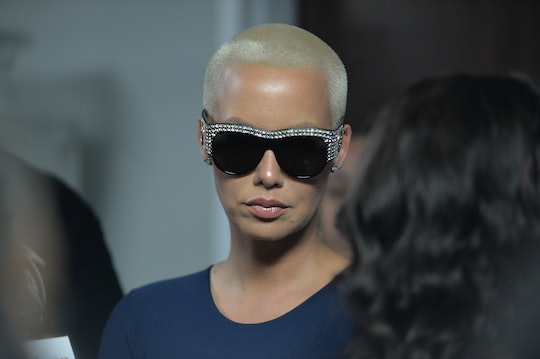 Amber Rose prides herself on being a feminist. She's made headlines with her annual anti-slut-shaming campaign, which she has dubbed Amber Rose's "Slut Walk." She has devoted her career to the idea that women should have the right to be as sexual as they want to be, without having to face negative labels like "slut." She wants to empower women by embracing the word "slut" and taking its power away. But while her intentions are positive, Amber Rose's anti-slut-shaming efforts, such as her recent #FreeTheBush initiative, can sometimes exclude the women she's ostensibly trying to empower.

Last week, Amber Rose posted an Instagram photo of herself nude from the waist down in an attempt to promote her third annual Slut Walk and subvert Instagram's anti-nudity policy. The photo was captioned "#freethebush," which is ostensibly supposed to encourage women to embrace their body hair instead of being ashamed of it. Predictably, Instagram removed the photo, prompting Rose to put up another post with the caption: "When IG deletes ur fire ass feminist post but you really don't give a f*** because everyone picked it up already #amberrosesslutwalk #bringbackthebush."

Rose's post spawned the #AmberRoseChallenge, in which women are posing bottomless and nude in an effort to destigmatize pubic hair. The hashtag has prompted a social media firestorm, with Piers Morgan objecting to Rose's claim that the photo was an attempt to further her feminist ideals. "I can handle your naked body, Amber — relax," he tweeted to Rose. "I just can't handle your ridiculous claim to be stripping off in the name of feminism".

As a feminist mom, I applaud Amber Rose for being bold, open, and honest about her sexuality. Further, Morgan has a history of trolling feminists and policing other women's sexuality. (He made a similar argument last year, when Kim Kardashian and Emily Ratajkowski posted their own nude photos.) But I think the controversy over Rose's post raises some important questions about how alienating her brand of sex-positive feminism can feel for many women.

Rose's #freethebush post might feel empowering to her. But even though her post was ostensibly trying to de-stigmatize pubic hair (she has never explicitly said anything to that effect), let's be honest — she was still perfectly groomed, with her legs and presumably her armpits totally waxed and shaven. It would be awesome if Amber Rose put her money where her mouth was and let herself be photographed in public with hairy armpits and hairy legs, but unfortunately, there's nothing that our culture considers sexy or headline-grabbing about that.

Not all feminists want to strip down or display our bodies to show off or make a statement. That doesn't mean we're prudes, or that we're somehow failing other women: it just means that not all feminists feel empowered by showing off their bodies.

It's also worth noting that just like Ratajkowski and Kardashian, Rose's naked body looked flawless by our society's standards. What kind of statement does it send to young women when the people who are trying to de-stigmatize female nudity are the ones that mainstream culture actually wants to see naked to begin with?

Further, as a feminist, equating nudity with liberation makes me uncomfortable. Not all feminists want to strip down or display our bodies to show off or make a statement. That doesn't mean we're prudes, or that we're somehow failing other women: it just means that not all feminists feel empowered by showing off their bodies.

Feminism is not directly related to nudity or an open display of sexuality. In fact, "the idea that women must have lots of sex to be sexual can actually encourage the notion that women can only be sexual in relation to others," Suzannah Weiss wrote for Feministing. "It can also encourage the anti-feminist idea that outsiders get to define a woman’s sexuality, rather than the woman herself."

I am a feminist and want women to have equal rights. I also want Amber Rose and women like her to have the right to be open about their sexuality, in whatever way they choose. But I also don't want my daughter to feel pressured to expose herself to gain acceptance or success, both within and outside of the feminist movement. Though I want her to grow up in a world where she is free to be sexually open and comfortable with her body, I don't want her to feel like she has to do those things to be considered a good feminist.

I want my daughter to grow up in a world where she is free to be sexually open and comfortable with her body. But I don't want her to feel like she has to do those things to be considered a good feminist.

Though I feel like Amber Rose's sex-positive movement is well intentioned, her #freethebush post misses the mark. Not only does it fail to indicate that women should embrace all of their body hair, it also continues to separate feminists into two groups: those who are comfortable openly displaying their sexuality, and those who are not and are subsequently deemed prudish or ashamed of their own bodies.