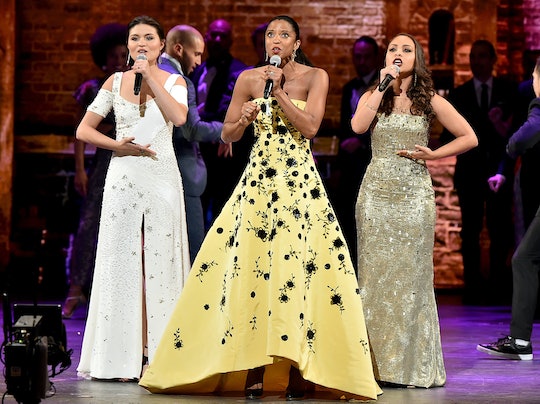 The Schuyler Sisters have done it again. The original cast members of the Broadway hit Hamilton — Phillipa Soo, Renee Elise Goldsberry, and Jasmine Cephas Jones — dazzled millions on Sunday night when they reunited to sing “America the Beautiful” at Super Bowl 51. The performance aired during the televised pregame show and got the crowds pumped up for the annual showdown between this year’s best in the NFL: The New England Patriots and the Atlanta Falcons. Even though there was a lot of hype leading up to the star-studded musical extravaganza, these reactions to Hamilton’s OG cast belting out the patriotic song prove that we will forever be in awe of these amazingly talented ladies.

Sure, we had more than a week to prepare ourselves before the big day. But, as many on social media have pointed out, it clearly wasn’t enough time and we were still stunned. The NFL announced on Jan. 27 that it had booked the three Broadway stars as well as country star Luke Bryan to sing the national anthem before kickoff, leading us into Lady Gaga as this year's halftime entertainer.

Soo, Goldsberry, and Jones starred as the original Schuyler Sisters in the hit Broadway production and have since moved onto other exciting projects. “Goldsberry is featured in the upcoming Netflix series Altered Carbon and plays the titular role in the HBO film The Immortal Life of Henrietta Lacks, alongside Oprah Winfrey and Rose Byrne” according to The Hollywood Reporter, and "Soo will return to Broadway as the star of Amelie, opening this spring. Jones will appear in the horror flick Blood Surf, starring James Franco and Lorelei Linklater.”

While the ladies have moved onto other gigs, this reunion performance was a reminder that any time that the original Angelica, Eliza… and Peggy get together, it will always be spectacular. And that is basically what people on social media had to say about it after these amazing ladies worked the stage once again.

Here are some of the best reactions to their "America the Beautiful" performance at the Super Bowl:

People were ready to be amazed.

But the internet went wild and the crowd roared after they added "and sisterhood" to the iconic song.

Chrissy Teigen even chimed in on the amazing addition:

This year’s performance is clearly one that will be remembered, and the Schuyler Sisters' rendition of "America the Beautiful" is now added to a list other iconic pop stars to sing the song, such as Alicia Keys, Faith Hill, Queen Latifah, Lea Michele, Jennifer Hudson, and Ray Charles.

The Hamilton trio dazzled us, gave us goosebumps, and pumped us up for the big game, leaving us with a performance that might be talked about just as much as the Broadway musical.