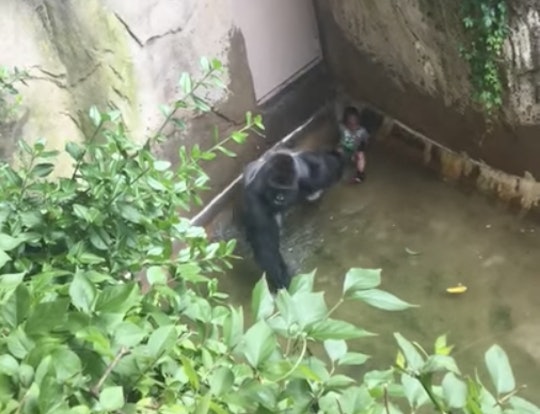 Last week, zoo officials in Cincinnati were faced with a very difficult decision to kill an endangered gorilla after a young boy found himself in a very dangerous situation. Adding to the flood of criticism on social media towards the parents, Anonymous has now threatened the family whose son fell into the gorilla enclosure in a video, delivering words of warning on its Facebook page.

In the video posted by Anonymous Ohio— a group that describes itself as being loosely connected to the larger cyber-hacking organization — a robed figure wearing a Guy Fawkes mask in a robotic voice responds to the incident at Cincinnati Zoo, blaming the death of the 17-year-old silverback gorilla named Harambe on the zoo and the child’s mother.

“Harambe rushed to the child's aid. As people screamed in fear for the child's life, Harambe sheltered the child and looked at the bystanders with fear in his eyes," the voice in the video said. “He drug the child to a corner and protected the child, exactly as gorillas do with their offspring. Harambe showed no signs of aggression. Zoo employees shot Harambe dead instead of using any other means to rescue the child.”

The group is calling for a full investigation on the boy’s mother, Michelle Gregg, and want her to be held responsible for the death of Harambe, while revealing her workplace and its contact information.

“This situation could have been avoided if it weren’t for the negligent parenting decisions of Michelle Gregg,” the voice said. “We are calling on an investigation into the zoo and Michelle Gregg.”

In response to the outrage, Gregg took to her Facebook to explain that accidents happen can happen to any parent. In the now deleted post she said, “As a society we are quick to judge how a parent could take their eyes off their child.”

While the incident has been the focus of an enormous amount of controversy blaming Gregg for not keeping a closer eye on her son, the mother has gotten a great deal of support with other moms sharing similar stories.

I have seen death threats and horrible things said about you. But I know that even the best parents have lost their children. They have lost them in public and it could have been any one of those people calling “neglect” to have had the exact same thing happen to them. It’s just, they lose their kids in the supermarket, at parades, at crowded malls, and even airports. And in every one of those instances it’s about saving the child.

While the group claims to be monitoring Gregg’s social media accounts closely, it’s not clear if the Ohio-based organization is actually connected to the larger and well-known Anonymous cyber-hacking group.

As of Tuesday, Cincinnati police announced that the boy's family will be the focus of an investigation about the events leading up to the shooting. While authorities and experts assess the situation, it's clear that Harambe's tragic death, Gregg's parenting, and who to blame will remain a heated debate for some time.