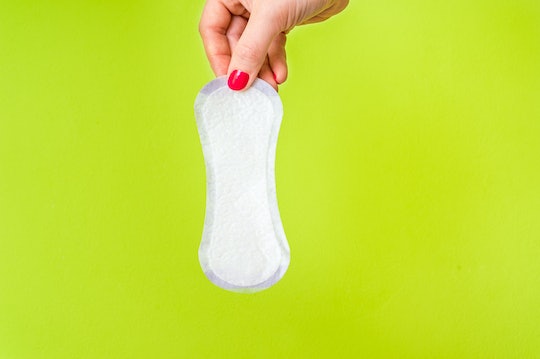 Here's Why Your Period May Be Irregular After Having A Baby, According To Experts

When you’re postpartum, your body is going through some major changes. (As if the changes your body went through while you were pregnant weren’t enough.) On the plus side, it’s trying to get back to how it was before you were pregnant. On the negative side, other “normal” bodily functions you had pre-pregnancy may not be so normal right after you have a baby, including your period. Are your periods irregular after pregnancy, or is your period schedule also part of the “new you” postpartum?

Dr. Yvonne Bohn, an OB-GYN at Providence Saint John’s Health Center in Santa Monica, California, tells Romper in an email interview that even if you’re not breastfeeding, your periods can be irregular because ovulation can be affected by your body weight, whether it’s weight gain or weight loss. “It can also be affected by stress or sleep deprivation,” Bohn says. And boy is sleep deprivation with a newborn an understatement, am I right? Additionally, "some women can develop postpartum thyroid dysfunction which can prevent periods from coming,” she says. Otherwise, if you’re not breastfeeding, you should expect to start your regular period about six to eight weeks after delivery, according to Bohn. Good to know.

However, don’t get your postpartum bleeding confused with an actual period. Regardless if you had a C-section or vaginal delivery, unfortunately, you will bleed after giving birth. That’s what all those mesh panties and pads are for — and why you should grab as many as you can from the hospital before you’re evicted. This bleeding is different from period bleeding because it’s your placenta detaching from the uterus, according to Dr. Adrienne Zertuche, an OB-GYN at a Division of Atlanta Women’s Healthcare Specialists. And since that spot in your uterus was an excellent source of blood supply to your baby while you were pregnant, it takes a little while to realize it doesn’t need to be supplying the baby anymore. So it continues to bleed and shed tissue, according to Zertuche.

Is there any way to help get your periods back on track postpartum? Bohn says yes. “If you are not breastfeeding, your doctor can use hormones to induce regular periods while your body adjusts from pregnancy and delivery.”

Turns out, it’s pretty common and expected for your periods to be a bit irregular after having a baby — whether you’re breastfeeding or not. If you’re still not starting your period after six to eight weeks and you’re not breastfeeding, you might want to check in with your doctor to be sure it isn’t a thyroid issue and see if there’s anything they can do to get you back on track. Yes, there are a ton of changes to your body once you’re pregnant and after the baby, but hopefully it’s worth it, right? Enjoy those newborn baby snuggles and try not to fret too much about your period.