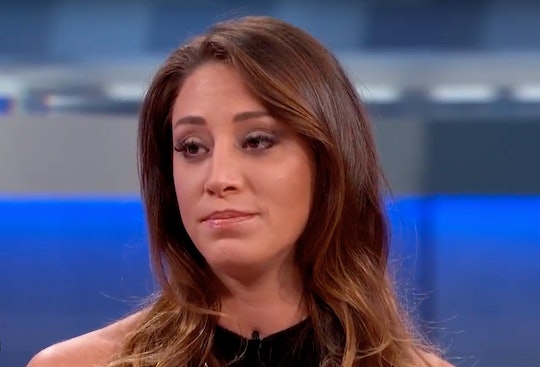 'Bachelor' Star Vienna Girardi After Miscarriage: Is This Going To Happen Again?

Suffering a miscarriage is a traumatic experience for so many women, and the heartbreak that they have to process after losing their babies can be overwhelming, even debilitating. Many women need to take time to grieve the loss and face their concerns about what it means for their futures. That's certainly true for The Bachelor alum Vienna Girardi, who shared the "scariest" part of her miscarriage in an appearance on The Doctors this Thursday. Before this appearance, Girardi had already publicly announced that she was pregnant with twin girls, but tragically lost both of them to a medical phenomenon called Twin to Twin Transfusion Syndrome (TTTS) back in August.

The pain of miscarrying the twins had to have been compounded by the fact that she had to do it in the public eye, as fans knew about the pregnancy before it abruptly ended. Still, Girardi shared her story on Thursday in a move that could only make other women feel less alone and educate them, too.

She revealed what was truly the "scariest" part of the entire episode — which played out over the course of a few harrowing days in August — on the show, according to Us Weekly:

The scariest part is after you have a miscarriage you start thinking, "Am I ever going to be able to have kids again? Is this going to happen again?"

It's 100 percent understandable that Girardi would be afraid, after living through such an tragic experience, that it would happen again — or that she wouldn't be able to get pregnant again. After all, her water broke when she was 18 weeks pregnant in early August, just a couple of months after she announced she was pregnant with twin girls in June, according to E! News.

Knowing that her twins had TTTS — a serious disorder in which identical twins' blood vessels become connected, causing one to get too much blood and the other to not get enough — her doctors wanted to induce, even though the babies would not survive such a premature birth.

In an August Facebook post that Girardi called "hardest thing I have ever had to write," she chronicled what happened next, noting that she refused to be induced:

[The doctors] also said that there was a very slim chance under 5% that the babies could survive and the fluids in their amniotic sacs replenish themselves so as any mother would do I did everything to save them but their hearts stopped beating on day two which is also when I went into a septic shock with 104 fever ... My little angels went to Heaven on Aug 5th and I was rushed into the OR for emergency surgery and was in the ICU for 4 days.

For those who've never had such an experience, it's nearly impossible to imagine. There was some good news to emerge out of the ordeal though: After the surgery, she learned that the TTTS that claimed her daughters would not have any effect on her ability to get pregnant moving forward. As The Doctors' Dr. Nita Landry explained to the audience on the show, TTTS is a random, non-hereditary condition, and there's nothing new moms can do to prevent it.

In the end, Girardi opted to donate her twins to science "so they can also understand why this happens and be able to save another women who has twins with TTTS," she wrote in the Facebook post. That's an incredibly selfless thing to do, and Girardi should be proud of her willingness to share this harrowing experience in order to help others.