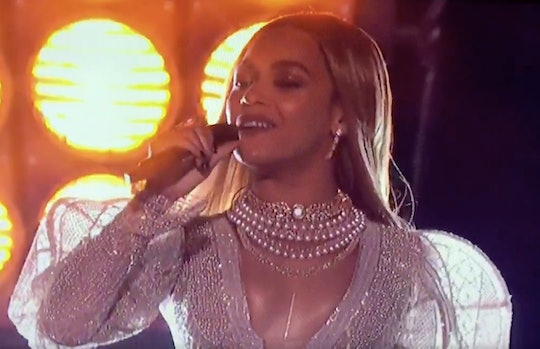 It's really not a televised event or an award show if Beyoncé isn't there. She can make practically anything worth watching and Beyoncé's CMAs performance this week was a testament to the fact that the pop star can slay any stage. Her performance of her hit "Daddy Lessons" with the Dixie Chicks was not without some controversy though, however incredible and entertaining it turned out to be.

After it was confirmed on Wednesday that Bey would be gracing the Country Music Awards' stage in Nashville, some people were worried that she wasn't "country" enough. Even one of the hosts, Brad Paisley, tweeted on Wednesday, "Frequently, country crosses over. But every now & then a major pop superstar wants to be a part of this too. Welcome, Beyoncé."

Sure, Beyoncé is usually lumped into the generic "pop" category but her roots — as anyone who's ever heard "Formation" knows — are southern through and through. "Daddy Lessons" wasn't some one off track on Lemonade, it's also about her roots, and those roots include more than a random "yeehaw" here and there. Country music came from African slaves, after all, even though it's now known as a genre dominated by white artists. Beyoncé's an artist — she does it all and she happened to have a huge album this year that dipped deep into all of American music's roots.

Beyoncé didn't seem to take any of the criticisms to heart though as she took over the stage to do her thing. Lit up from behind in a gauzy white gown, standing between the Dixie Chicks (who were dressed to the nines as well, in black leather like badasses, no less), the singer gave a powerful rendition of "Daddy Lessons" that any country fan could've easily appreciated. In short, she owned the room. (1,000 percent.)

Earlier this year, "Daddy Lessons" co-writer Kevin Cossom told Billboard that the song had a few influences. "It felt more folk than country, but I think people naturally interpreted it for country. I think folk is a sister of soul as well." When it comes to pop stars playing around with country or folk tunes, Cossom continued, "it’s not too far from what we already feel or do. It’s just changing the music format, making it more organic naturally." It's probably why the Dixie Chicks have been performing "Daddy Lessons" on the road, too. It just feels right.

This year, it was all about Beyoncé (and, of course, the inimitable Dolly Parton, who was given the Lifetime Achievement Award on Wednesday night). Sorry to intrude on the party, unhappy country music fans, but there's a reason we call her the Queen. Hopefully after Wednesday night, you'll learn to love Beyoncé's "country" side too.