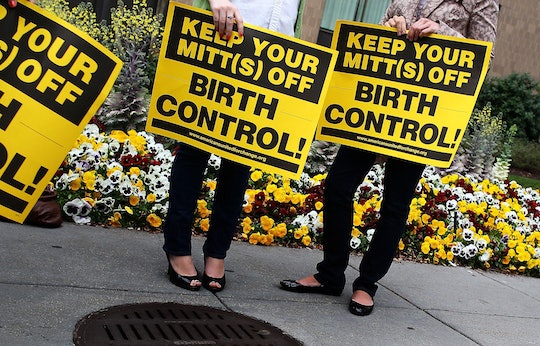 If the White House has its way, paying for birth control could soon become much more difficult for many women in the United States. Reportedly, federal officials have drafted a rule that would roll back Obamacare's controversial birth control mandate, in the name of religious liberty. The rollback could end up hurting a lot of women around the country, and reverse much of the good that the mandate seems to have done since it took effect.

More Like This
The FDA Has Authorized The Pfizer Vaccine For Kids As Young As 12
Survey: Just 30% Of Parents Would Get Their Kids Vaccinated Against COVID-19 Right Away
The Nonmonogamous Moms Next Door
31 Things Your Postpartum Friend Needs You To Text Them

As it stands now, the mandate requires employers to provide birth control coverage in their health insurance plans for employees. Many religious organizations have objected to the measure, saying it forces them to violate their consciences, and have filed lawsuits against the government. Earlier in May, President Donald Trump signaled his intention to address religious concerns and overturn the regulation when he signed a "religious liberty" order, instructing federal departments to "address conscience-based objections to the preventative-care mandate."

The new rule is reportedly in the "interim final stage" of review. The text of it is not yet available, and it is unclear when exactly it will be unveiled, but it could go into effect as soon as it is published in the Federal Register.

While following your conscience is all well and good, there are a number of potential issues with relaxing the mandate.

First of all, the mandate actually already offers an exemption for religious employers who morally oppose birth control. These organizations can simply tell the health department that they do not want to provide that coverage, and the government will provide alternate options for female employees.

According to The Guardian, however,

But there are huge benefits to helping women get the preventative services they need. A 2014 study found that the abortion rate in the United States was at its lowest point since Roe v. Wade took effect, and that such a low rate was likely caused by greater access to contraception. More accessible contraception leads to fewer unintended pregnancies, which then saves taxpayers money. (According to a 2015 analysis by the Guttmacher Institute, unintended pregnancies cost taxpayers $21 billion a year.)

According to a recent non-partisan poll, many women would have trouble paying for birth control if the mandate were rolled back. But soon, those women may have their current protections yanked away anyway, in the name of someone else's religion.