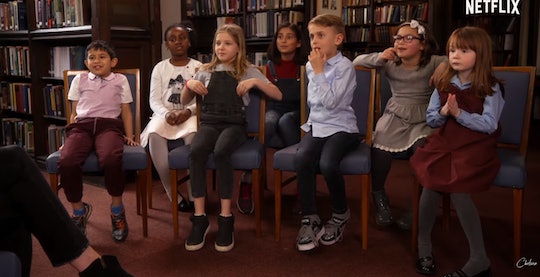 Brits are known to be a bit cheeky from time to time and it’s no different with the little ones, especially when it comes to the commander in chief from across the pond. In a clip from a recent episode of Chelsea Handler’s Netflix show, Chelsea, the comedian and host interviewed a group of children in Britain about America’s current political state and President Donald Trump. Needless to say, these British kids couldn’t help but put Trump on blast for his citrusy skin tone, blonde swooshy hair, and even his policies that can veer on the side of, well, "controversial."

Handler starts the interview by asking the group if they know who the president of the United States is, and almost every kid throws their hand up with the answer. "Donald Trump," a little boy named Jonam answers before asking Handler if she voted in the past presidential election. "Did I vote? Yes, I voted. For Hillary Clinton," Handler answers, to which the kids collectively exclaim, "Yes!"

Handler then directs a question to a boy named Charlie and asks him what he knows about Trump. "Well, for starters he’s got an orange face and I think he’s got a wig. A wig collection," Charlie says.

Branching off of the common jokes and comments about Trump’s appearance, Handler also asks the kids if they think the president uses self tanner at home. "I know he doesn’t like people with brown skin," Charlie replies. (Charlie is going places.)

Even though it totally helps that they have charming British accents, this interview is easily one the most adorable burns against the president to date. Watch their spot-on answers below:

The video already has more than 25,000 views on YouTube and dozens of comments from impressed and entertained viewers alike. "I wish kids could vote," one viewer wrote. "Innocence and truth," another commented. ﻿

These British kids certainly hit a lot of issues right on the head, but they aren't the only ones who have a sour perspective of the president. According to CNN, a new Quinnipiac poll found that Trump's approval rating right now is at 34 percent with 57 percent of surveyed voters saying that they do not approve of the job Trump is doing in office.

With these little Brits echoing some of the underlying concerns backing those ratings, at least the majority of Americans can rest assured that they're not the only ones concerned about the current political hell-fire.