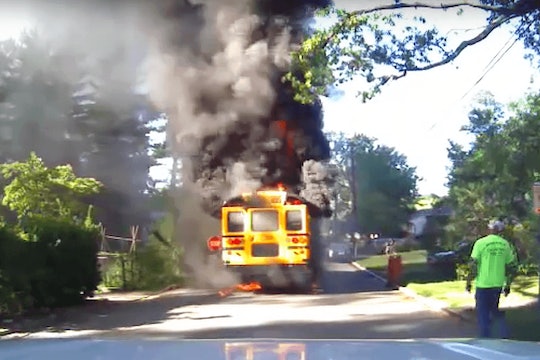 When you think of a vehicle burning rubber, you wouldn't normally assume it's actually on fire — but for 20 elementary school students in College Park, Maryland on Tuesday, it was anything but a typical ride home from school. As nearly two dozen kids rode home Tuesday late afternoon, their school bus became engulfed in flames. Had it not been for their Prince George's County Public School District bus driver Reneita Smith's quick actions, it's possible that residents of College Park would be reading a far grimmer headline this morning. Smith is a true hero, having saved children from a burning bus, but as it turns out, she doesn't see herself that way.

At approximately 4:45 p.m. ET, Smith's bus caught fire somewhere around the rear wheels, according to witnesses. Smith, a mother of a two children herself, managed to get all 20 children safely out of the burning bus — no injuries were reported. You could call it a miracle that no one got hurt or worse, but for Smith, it was a moment of humble heroism: Fazlul Kabir, a parent of one of the children rescued from the flaming bus, recalled that Smith told him at the scene, "I am a mom of two kids. It’s my job to save them."

Kabir posted thanks to Smith on Facebook, sharing photos of Smith herself, as well as the badly burnt school bus. "Not only did Reneita took [sic] each one of the 20 kids from the bus one by one, but also went into the empty bus again while it was still burning," Kabir wrote in the Facebook post.

Video retrieved from the dash cam of responding firefighter Mark Brady of the Branchville Volunteer Fire Company showed a terrifying sight as the bus was completely consumed by smoke and flames. When you see the video, it's hard to believe that not a single student — nor Smith herself — was injured in any way.

Speaking to a local NBC affiliate, Smith spoke of how her own motherly instincts kicked in at the first sign of danger: "As I'm driving that bus, they're my babies. I'm their mom until I drop them off to their biological moms." Smith tried to use a small fire extinguisher on board the bus to try and put out the flames, but the fire spread too quickly for her to keep up. "I opened my door, took off my seat belt, and I got my babies off that bus," she continued. The cause of the bus fire is currently under investigation by local authorities.