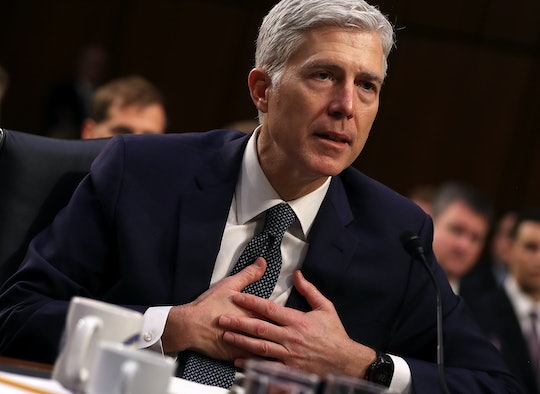 Senate rules could soon be in for some big changes, thanks to the current fight over Supreme Court nominee Judge Neil Gorsuch. As of Monday, Democrats appeared to have the votes to filibuster President Donald Trump's pick to replace Antonin Scalia. But can Republicans break the Democrats' filibuster of Gorsuch? They can if they invoke the so-called nuclear option, and change the rules.

Invoking the nuclear option would be the latest manifestation of the partisan rancor in this Supreme Court fight. The seat in question opened up during President Barack Obama's second term, but Senate Republicans refused to even grant Obama's nominee, moderate Merrick Garland, a confirmation hearing. Coming into Gorsuch's hearing, many Democrats were still livid over what they viewed as Garland's unfair treatment. On top of that, Gorsuch's hearing raised further questions, given his evasive answers and certain extreme rulings in the past. (Most notable, perhaps, was Gorsuch's dissenting opinion that a company could fire a truck driver who abandoned his cargo in freezing conditions.)

On Monday, the number of Democrats who announced that they would oppose Gorsuch's nomination reached 41, the necessary amount to sustain a filibuster. Republicans can get around that, but only by using the nuclear option. And, as the name implies, the nuclear option is not meant to be taken lightly.

The idea behind Senate rules is that something as important as a Supreme Court justice's confirmation should have some measure of bipartisan support. But with the nuclear option, Republicans can permanently change Senate rules so that, from here on out, confirming a Supreme Court nominee will require only a simple majority. This move is called the nuclear option, because it's likely to "blow up" bipartisanship. Although it looks like Republicans will probably invoke the nuclear option, no one seems to be feeling particularly good about it, with Arizona Sen. John McCain telling NPR, "It is depressing; I'm very depressed. We're all arguing against it, but we don't know any other option."

In fact, back in 2013, amid Republican obstructionism, Democrats triggered the nuclear option when it came to presidential nominees besides Supreme Court picks. The decision came back to bite them when Trump took office, and Senate Minority Leader Chuck Schumer has publicly said that he regrets that Democrats made that decision.

We'll have to wait and see if, in the future, Republicans have similar regrets. The filibuster and possible triggering of the nuclear option should all play out this week, and while it's difficult to know exactly how everything will end up, one thing is certain — this Supreme Court fight has revealed an extreme level of partisan division in the Senate, and it's not a good sign for the future.