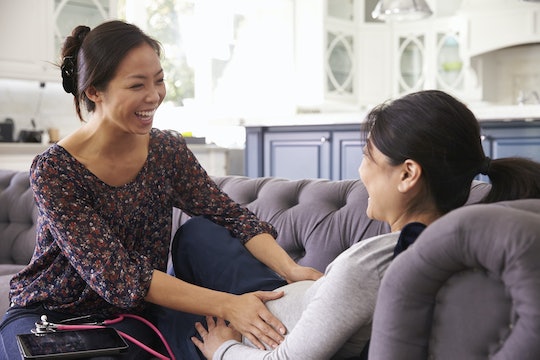 You Can Do Kick Counts With A Tilted Uterus

Kick counts sound like a lot of fun, whether you're counting the number of cool high-top sneakers you own or keeping track of how many times your baby kicks inside your belly. For many women, the latter version of kick counts may not be an issue, but for women who have been told they have a tilted uterus, this may pose the question: can you do a kick count with a tilted uterus?

According to the American Pregnancy Association (APA), a tilted uterus is when the uterus is tipped backward towards the pelvis, instead of the normal straight vertical position. A tipped uterus can be caused by not moving into position during development, by childbirth or pregnancy when ligaments that hold the uterus in place stretch or lose tension, or because of scarring from endometriosis or fibroids.

The APA also noted on their website that the symptoms of a tilted uterus can range from pain with intercourse or menstruation, incontinence or urinary tract infections, fertility problems, or even having a hard time using tampons. A doctor can easily diagnose a tilted uterus with a simple pelvic exam.

When it comes to kick counts, the APA suggested that counting your baby's kicks is very important, because noticing any changes in your baby's movements can help identify any potential issues. With a tilted uterus, you may worry that you won't be able to feel your baby kick, but that shouldn't be the case.

Seth Plancher, MD, OBGYN tells Romper that having a tilted uterus shouldn't make a difference. "I don't think a tilted uterus has any effect on fetal movements or kick counts," he says.

What To Expect explained on their website that a tilted uterus will be gone by the second trimester of pregnancy when your uterus expands and straightens itself up in your pelvis into your abdomen. At this point, you will start feeling the fluttery movements of your baby, and counting those tiny little kicks should be no problem at all. If you feel like your baby has decreased movement, regardless of your uterine position, it's worth reaching out to your healthcare provider for reassurance and a check-up.