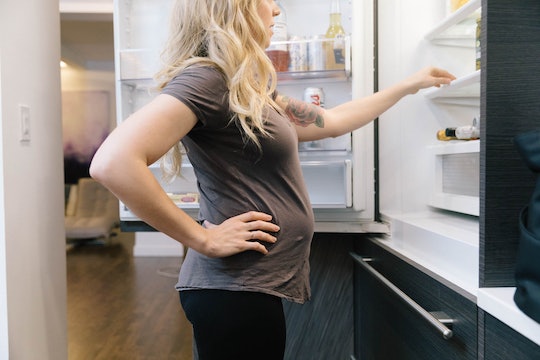 Can You Give Into Cheese Cravings When Pregnant? Experts Weigh In

With so much debate over what is and isn't safe to eat during pregnant, a mom-to-be can become pretty overwhelmed. Especially when people who’d never been pregnant make it their civic duty to monitor everything you put in your mouth. (No Carol, one cup of coffee isn’t going to terminate my baby, but thanks for asking if I should be drinking it.) The question that threw me for the biggest loop, however, was “Can you have hard cheese when you’re pregnant?” Finding the answer was surprisingly complicated.

Although cheese isn't a total no-no, it's important to take into consideration what type of cheese you're eating. According to Parents, you may need to avoid soft cheeses such as Brie, goat, feta, queso blanco, blue or any other veined varieties. Much like deli meat, soft cheese could be contaminated with listeria, which can lead to food poisoning.

But this is where modern guidelines get a little confusing. In 2016, the Food and Drug Administration (FDA) altered it's guidelines to state that soft cheese is OK for pregnant women if it's pasteurized. There are some experts and sources, however, that disagree. Made For Mums, for one, shared that the pasteurization doesn't matter; what matters is whether the cheese has been mold-ripened and has a rind. If it has been mold-ripened with a rind, the cheese isn't safe because it's less acidic and contains more moisture, making it an ideal environment for harmful bacteria to grow. The good news is that you can cook these types of soft cheeses (with a rind) until they're hot all the way through, which makes them safe to eat during pregnancy.

Hard or cracked cheese, on the other hand, is generally a good sign for pregnant women seeking their cheese fix. Cracking can occur during the aging process with too much air movement, according to Curd Nerd. The aging process, however, is actually what kills all of the bacteria naturally and makes hard cheeses safe for pregnant women, according to the aforementioned Parents article. So, if you want to avoid the complication and mixed advice that comes with partaking in soft cheese, hard cheese is the way to go safely.