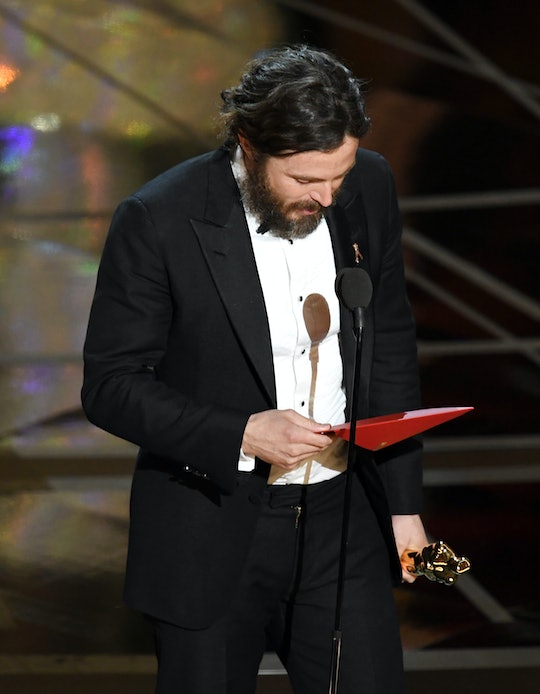 The Academy Awards are never without controversy, as entertainment fans around the world (or at least those who frequent social media on a semi-regular basis) know. However, when Casey Affleck won an Oscar for Best Actor in a Lead Role for his work in Manchester By the Sea at Sunday night's Oscars, the glaring problem with the way our society (and Hollywood especially) views white male privilege was painfully obvious. When Casey Affleck didn't have something "bigger and more meaningful" to say at the Oscars, those problems became once more horrifically unavoidable.

Leading up to Hollywood's most prestigious and glamorous evening, Affleck was inundated with what can only be described as "praise" for his work in the film. Still, an ominous past accusation he's emphatically denounced and ignored followed him everywhere. In 2010, producer Amanda White and cinematographer Magdalena Gorkatwo, both of whom worked with 41-year-old Affleck on the Joaquin Phoenix mockumentary I'm Still Here, accused the actor of sexual harassment. The two women, according to The Cut, alleged Affleck both verbally and physically harassed them throughout filming, eventually suing the now Oscar-winning actor for $2 million and $2.25 million, respectively. The case was settled outside of court for an undisclosed amount following mediation. A request for comment by Romper to Affleck's PR representative on the sexual harassment allegations was not immediately returned at the time of publication.

Although Affleck has denied the allegations — in an interview with The New York Times he described them as "baseless attacks on his family" — he's been unable to completely unearth himself from the shadow they've cast on his road to Oscars notoriety. Affleck very publicly dodged the question in past interviews (if the allegations arose at all) and though he completely avoided the topic when hosting Saturday Night Live earlier this year, it seems everyone acknowledges the elephant in the room. It's just that no one seems to mind much that it exists.

It didn't come as a shock when, during his acceptance speech, Affleck said he wished he had "something bigger and more meaningful to say" about his Best Actor win. Shielded by the veil of his privilege in an industry that favors white cisgender males, Affleck drawing blanks on the most powerful stage in film speaks very clearly about how our country handles sexual assault, harassment, and sexual violence.

An actor's ability to celebrate his achievements pales in comparison to the never-ending trauma sexual assault survivors are forced to endure. Throughout the course of Oscars history, winners have used their acceptance speeches to speak about more than themselves; drawing attention to causes or social injustices that affect them on a deeply personal or even professional level.

As a sexual assault survivor, navigating triggers and seeing my pain played out in movies or television shows as "plot lines" is nothing new. But to watch a man who'd been accused of sexual harassment be rewarded, then miss an opportunity to give voice to his experience on a stage so profound, is infuriating. Since the case was settled outside of court, we'll likely never know what truly happened between Affleck and his accusers. However, I do know that if his claims of honest innocence are true, the actor — who's now earned his own piece of Hollywood history — missed out on a chance to speak up for those who are fighting, living, and surviving the very real consequences of sexual assault, harassment, and violence in our country.

This is not simply a "women's issue," but an epidemic all people of all genders, races, and socioeconomic statuses need to address. These uncomfortable conversations are not only vital to ending sexual violence against women, they're a responsibility we all have as members of a greater, shared humanity. An actor's ability to celebrate his achievements pales in comparison to the never-ending trauma sexual assault survivors are forced to endure. Throughout the course of Oscars history, winners have used their acceptance speeches to speak about more than themselves; drawing attention to causes or social injustices that affect them on a deeply personal or even professional level. Using the past as a litmus test against Affleck's lackluster acceptance speech, it's clear to see just how Affleck failed: the system, the accused, survivors, the industry, sexual violence advocates, his fans, and most of all, himself.

If shifting the narrative from himself and his purported past was of any importance, he could've accepted responsibility as a privileged man who has the immunity to be unfazed by such allegations. He could've brought to light statistics that prove sexual violence against women isn't just an unsightly mark on a man's resume, but an event on the national register worthy of constant conversation, education, visibility, and advocacy.

He could have read the heartbreaking letter penned by the Stanford Rape Victim. After her convicted attacker, Brock Turner, was sentenced to six months for sexual assault (of which he only served three), where a judge claimed a longer sentence would have a "severe impact on him," the letter circulated far and wide, showing the impact sexual assault has on victims and not, like Turner, the perpetrators. Imagine, a man accused of sexual harassment, just awarded the highest honor in his respective field, reading a passage like this:

My independence, natural joy, gentleness, and steady lifestyle I had been enjoying became distorted beyond recognition. I became closed off, angry, self deprecating, tired, irritable, empty. The isolation at times was unbearable. You cannot give me back the life I had before that night either. While you worry about your shattered reputation, I refrigerated spoons every night so when I woke up, and my eyes were puffy from crying, I would hold the spoons to my eyes to lessen the swelling so that I could see.

Affleck has seemed hellbent on keeping the spotlight on his work, rather than the allegations against him. So, if he truly wanted to stray from implicating himself, or drawing attention to what happened in 2010, he could've used such an incredible platform to speak directly to those who are often doubted, emphatically ignored, and made to live with the aftermath of sexual violence day in and day out. If shifting the narrative from himself and his purported past was of any importance, he could've accepted responsibility as a privileged man who has the immunity to be unfazed by such allegations. He could've brought to light statistics that prove sexual violence against women isn't just an unsightly mark on a man's resume, but an event on the national register worthy of constant conversation, education, visibility, and advocacy. Instead of feigning ignorance, he could've acknowledge that these atrocities exist, not in a vacuum, but in every facet of our lives, whether for a college student at a prestigious university or a Hollywood A-list star.

For Affleck, Oscars night was surely a night he's looked forward to, and it's likely one he'll never forget. For a man in his position of power, he was honored for his work while his past was ignored; celebrated for his commitment to telling a story of Manchester By the Sea, of a white man standing in for good, of doing right. At Sunday night's Oscars, Affleck enjoyed a privilege not awarded to many, as every 98 seconds an American is sexually assaulted in this country. For those Americans, most of which are women, Oscars night was a painful reminder that a survivor's experiences come second to a high-profile award. Until the devastation of sexual violence against women is considered a "bigger, more meaningful" topic of discussion we'll never move forward on behalf of victims.