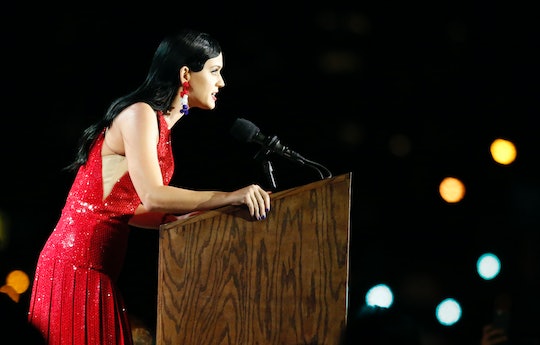 Twitter has been the center of responses to the election as it's unfolded, and people from all over the world have offered up their thoughts. So to have many famous people provided commentary throughout the night, some comedic and some deeply sobering. The celebrity reactions to the election prove that even Hollywood's elite are not immune to the chaos that has been the 2016 election.

Many who are in positions of power, whether in politics, media, or entertainment, use that privilege to influence those who follow them. This is especially easy to do on social media, where they can tweet, post Instagram photos, or write long Facebook posts explaining how they feel about an issue, political candidate, or event and encourage their fans to feel similarly.

Then, of course, there's Taylor Swift who made headlines on election day because she didn't reveal who she'd voted for. The rest of the celebrity sphere took to Twitter long into the night on election night to at first, share their thoughts, but then, to offer hope.

Katy Perry spent the evening at Hillary Clinton's headquarters in New York City, and told the crowd that although she supports Clinton and cast her vote for her today, she was still grappling with the fact that her parents are Trump supporters.

While it's tempting to put famous people on pedestals, there's never been a more apt time to remember that they are just people. And in fact, they are not just people: they are women, people of color, members of the LGBTQ community people with disabilities, and immigrants. The people who make us laugh on late-night TV and cry through Netflix binges, who direct and write films, who bring the kind of turmoil so many are feeling to life as art are all people who will be affected by the outcome of this election, just like us. It's a more severe take on the rag magazine trope of "Stars! They're Just Like Us" — but it's true. In times like these, those who are in a position of influence have a responsibility to use that power wisely, but the rest of us have to remember that they are only human.